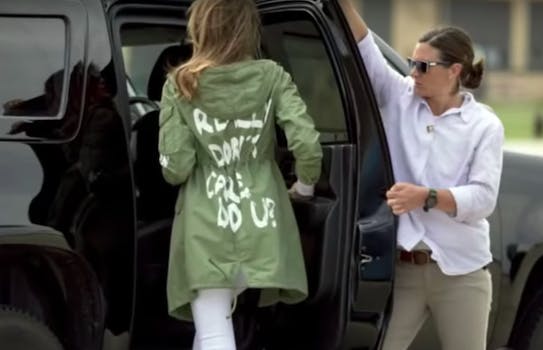 Interview reveals there was meaning to Melania’s jacket

She said she wore the jacket to troll the media.

Trump, who came under fire last week for wearing a pith helmet, long seen as a symbol of European colonialism, on her trip to Africa, said then that she wished people would pay less attention to what she wears, and more to what she does.

In June, Trump caught flack for wearing a jacket saying “I really don’t care, do u,” while on her way to visit refugee children separated from their parents and detained by her husband’s government.

At the time, Trump said the jacket had no particular meaning.

“It’s a jacket. There was no hidden message,” her communications director Stephanie Grisham said in a statement.

However, Trump contradicted that statement in Friday’s interview, saying,  “You know I often asking myself, I would not wear that if I would have so much media coverage. It’s obvious I didn’t wear the jacket for the children. I wore the jacket to go on the plane and off the plane. And it was for the people and for the left-wing media who are criticizing me.”

The jacket spurred outcry from the media and activists, who balked at her choice. Her advice to the children she visited in McAllen, Texas—”be kind and and nice to each other, OK?” and “Good luck,”— didn’t help, either.

“I want to show them that I don’t care,” Trump said in the interview. “You could criticize whatever you want to say, but it will not stop me to do what I feel is right.”

It’s a nod to the message her husband, President Donald Trump, tweeted at the time: “‘I REALLY DON’T CARE, DO U?’ written on the back of Melania’s jacket, refers to the Fake News Media. Melania has learned how dishonest they are, and she truly no longer cares!”

The first lady also said during the interview that she supported family reunification and was shocked when she learned of her husband’s zero-tolerance policy.