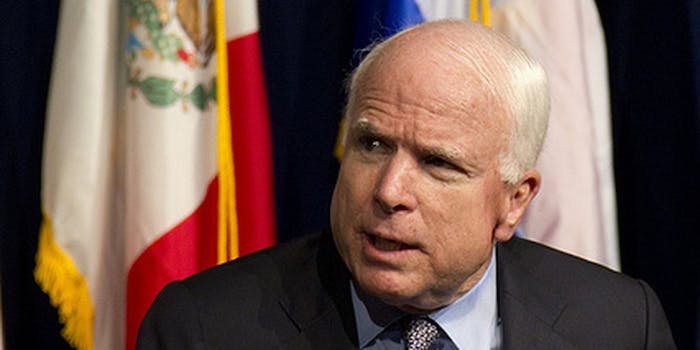 “Is there anybody who believes that this system is not broken in many respects?"

Arizona senator and former presidential candidate John McCain has called for a congressional investigation into the controversial surveillance practices of the National Security Agency, the Guardian reported.

“Is there anybody who believes that the system is not broken in many respects? I think not,” McCain told CNN on Sunday.

McCain’s call for an independent congressional investigation of the agency was prompted in part by White House’s announcement that on Friday it will reveal a number of reforms to the agency. Those changes will be based at least in part on a White House report on the agency that recommended ending the bulk collection of American’s telephone metadata.

Whether or not President Barack Obama will call for the end of metadata collection is unclear, but one federal judge has called the operation potentially unconstitutional.

As the Guardian pointed out, any reforms suggested by the president will likely require congressional action to implement. Because of this, McCain said, it is necessary that Congress begins its own independent investigation of the agency.

“Sometimes these agencies have done things just because they can,” McCain told CNN. “I think we need a select committee in Congress to go over this whole scenario, because it does overlap many committees.”

McCain also pointed out that another major issue with the NSA is its activities abroad, which have been disclosed at least in part by former intelligence contractor Edward Snowden. Through Snowden’s documents, which newspapers such as the Guardian, the Washington Post, and Der Spiegel began publishing in June 2013, it has been revealed that the agency taps Internet cables; monitors emails, chats, videos, and phone calls; and brokers deals with major telecoms in order to surveil people around the world.

“The values that we’ve got as Americans are ones that we have to be willing to apply beyond our borders,” McCain said.