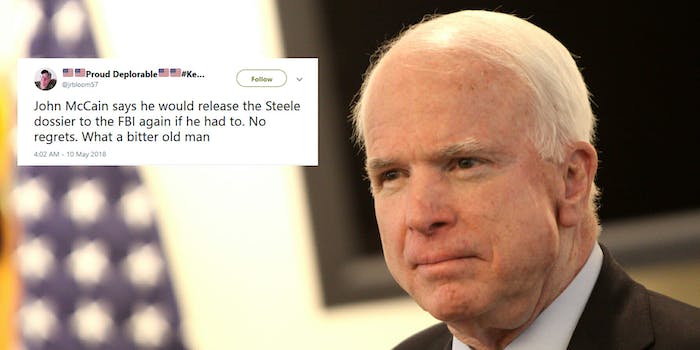 In the book, McCain writes that he “did what duty demanded” when passing the dossier onto Comey, adding that some of the allegations in it were “disturbing.” The dossier, which was partly funded by Democrats but started out as opposition research by a conservative media outlet, has been a source of controversy for Trump.

“I reviewed its contents. The allegations were disturbing, but I had no idea which if any were true. I could not independently verify any of it, and so I did what any American who cares about our nation’s security should have done,” McCain wrote, according to excerpts published by the Daily Beast.

“I did what duty demanded I do. I discharged that obligation, and I would do it again. Anyone who doesn’t like it can go to hell,” according to a published excerpt from the Guardian.

In the book McCain also expressed regret for choosing Sarah Palin as his vice presidential candidate during the 2008 election and criticizes Trump, which isn’t surprising, considering the rocky relationship the two have shared in the past several years.

The decision to hand over the dossier did not sit well with some of Trump’s supporters online.

On r/The_Donald, a fervent pro-Trump subreddit, the news was not taken well, with one user calling the Arizona senator “America’s asshole.”

“Can you believe that at one time our choice for President was Obama or this guy?” another r/The_Donald user wrote.

McCain’s confirmation was also blasted by Trump supporters on Twitter.

John McCain says he would release the Steele dossier to the FBI again if he had to. No regrets. What a bitter old man

While John McCain apparently makes the guest list to his funeral, and manages to write another book while not doing the job he was elected to do, his legacy will be his dossier involvement and dooming us all to Obamacare because of his jealousy & hatred of our President. #Sad

The dossier continues to be a point of contention, no matter which political party you’re in.