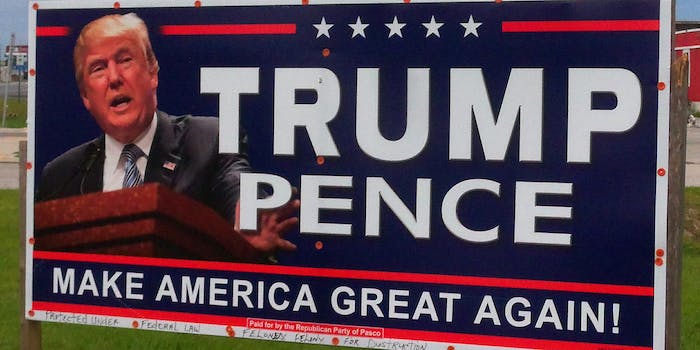 Two Baltimore-area teenagers have been charged with arson and committing a hate crime after they allegedly lit a “Make America Great Again” campaign sign on fire late last week.

D’Asia R. Perry and Joy M. Shuford, both 19, were arrested in connection to the incident, Maryland state fire officials said in a statement. The teens “intentionally set the billboard on fire due to political differences with the billboard postings,” according to the office of Maryland’s Fire Marshal.

By allegedly burning the sign “with discrimination or malice toward a particular group, or someone’s belief,” officials felt charging them with a hate crime was warranted, the Baltimore Sun reported.

The sign is located in a shopping center in Princess Anne, Maryland, and the son of the sign’s owner, Jamie Wink, said it had been up since September, the Sun reported. Wink helps run the family’s store, which sells firearms and hunting supplies, in the shopping center.

The sign is an enlarged version of the “Make America Great Again” logo President Donald Trump has used since beginning his campaign for president. It is affixed above a sign in support of Kathy Szeliga, a Republican state senator who has served in the House of Delegates since 2011.

A photo of the aftermath of the fire shows a burn mark on the bottom left of Szekiga’s sign. The Trump sign does not appear to be severely damaged. The fire spread to nearby vegetation, officials said.

Szeliga commented on the incident on her Facebook page, saying, “destroying property is not peaceful protest.”

Perry was found on the campus of the University of Maryland Eastern Shore and taken into custody after being identified as a driver of a car involved in the incident using video surveillance. Shuford turned herself in on Saturday, according to fire officials.

Both women were released on a $20,000 bond, according to the report.