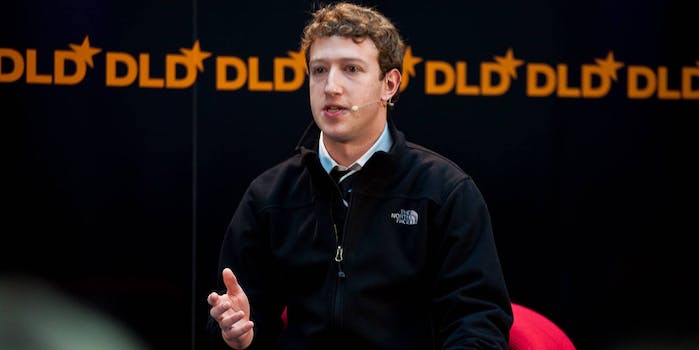 Mark Zuckerberg covers his webcam with tape, and so should you

Facebook CEO Mark Zuckerberg doesn’t mind posing for pictures, but eagle-eyed internet dwellers have pointed out that the billionaire appears to keep a piece of tape over his laptop’s camera and microphone.

Evidence that Zuckerberg’s privacy concerns came to light after a photo of him celebrating Instagram’s half a billion monthly active users milestone was posted.

While the picture centers on Zuck holding an oversized cardboard frame, in the background is his desk—set up right next to the desks of other employees, so pity the poor sap who has to sit across from the company creator—along with his laptop. A couple hits of a CSI style “enhance” button shows a piece of tape over the camera and microphone jack of the MacBook.

3 things about this photo of Zuck:

There is plenty of irony to be found in the paranoia of the man who invented one of the best personal information mining platforms known to humanity. But it’s not like the dude got caught wearing a tinfoil hat to keep the aliens from controlling his brain.

Putting a piece of tape over your camera isn’t just a reasonable thing to do—it’s a simple and low-tech security measure that just about anyone can do. FBI director James Comey revealed earlier this year that he tapes up his camera, and digital rights group Electronic Frontier Foundation (EFF) sells stickers specifically for putting over your webcam.

Are you going to get some weird looks for blocking your camera? Sure. But you know what’s even more unsettling than belittlement from your peers? Having photos and videos of you taken without your permission from your private device.

The occurrence is anything but unheard of. Last year, a Toronto couple woke up to photos of them in bed, sent to them by a hacker who captured the images from the couple’s computer. There are entire guides to taking over webcams online, and forums dedicated to sharing stolen images.

It’s not just random actors, either; the FBI can reportedly turn on webcams remotely without the user being any the wiser. Edward Snowden revealed in 2014 that the NSA had similar capability.

Of course, the odds of you being a target to one of these attacks are incredibly low. But the amount of effort it takes to combat them is next to nothing and it can’t hurt to do it. It’s especially a good idea if you, like Zuck, use terrible passwords like “dadada” that could leave you exposed to all sorts of hacks.