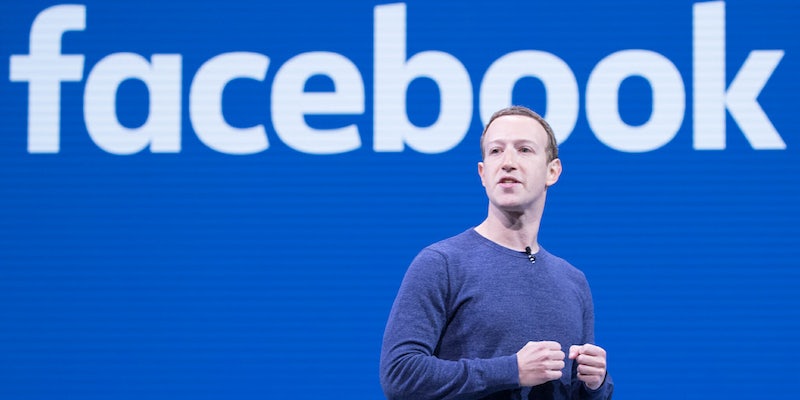 Following a year filled with privacy breaches and shocking ways Facebook has been using users’ data without their knowledge or consent, you would think that its CEO Mark Zuckerberg would resolve to address privacy and security issues in 2019. After all, aren’t New Year’s resolutions supposed to be about doing better? Instead, a week into the new year, in a post on his Facebook page Tuesday (also shared on Facebook’s Twitter account), Zuckerberg said his 2019 challenge would be “to host a series of public discussions about the future of technology in society—the opportunities, the challenges, the hopes, and the anxieties.”

In 2018, he did resolve to fix Facebook’s problems and yet look what happened: “Facebook ended the year plagued by negative headlines about data privacy and controversial PR tactics,” CNN notes.

To Gizmodo, it appears “he’s determined to launch some kind of talk show or something,” the website quips. “Zuck’s yearly post in which he tells us all about his latest ‘personal challenge to learn something new,’ has gone from being a fun, humanizing tradition about self-improvement to something more like a temperature reading on how things are going at Facebook.”

On one hand, his 2019 challenge appears to address the clamor for more transparency from the platform, as the Verge remarks that “these weighted questions can’t be a bad thing. Transparency has been one of the most prominent requests that critics of the company have made of Zuckerberg throughout the past few years.”

However, he’s issued this “challenge” while avoiding more pressing issues that need Facebook’s immediate attention. That, or it just goes to show he has no idea how to address Facebook’s mounting problems.

His post has over 54,000 reactions and over 10,000 comments so far. A lot of users appreciate Zuckerberg’s invitation to have more public discussions on the future of tech and expressed their eagerness to participate.

Some commenters who expressed interest in the discussions, like user Steven Levy, even earned a personal response from the CEO himself.

However, many are unimpressed by what the CEO chose to make his 2019 challenge. Commenters on his post and Facebook’s Twitter account gave unsolicited suggestions on what his resolutions should be instead. While the resolutions his followers suggested when he asked them for ideas in 2014 were a lot more varied and fun, a lot of the suggestions this year revolve around making Facebook more secure, protecting their privacy and data better, and becoming more transparent. “We just need you to stop selling our data with your friends,” reads Facebook user Gus Frinjs’s comment that garnered over 1,000 reactions so far.

Others wanted Facebook to explain better how users were suspended from the platform and for it to work on its censorship policy.

Hopefully he will learn to tell his 7,500 “content moderators” to stop interfering in his customers private & personal lives when we post & share things with our “friends”. But we know he won’t. pic.twitter.com/hMfbkZHMgt

I've got a personal challenge for @facebook this year and that is to respond to one of my numerous messages and tweets to yourselves over the last few months asking for help rejoining @facebook which I am unable to do for more than a day or so before having my account suspended.

Some Twitter users’ suggestions involve who should be in his public discussions:

We can help out @facebook here. Mark Zuckerberg can start off his 2019 tech talk tour by coming to London and answering questions from the UK parliament @CommonsCMS https://t.co/Bu7MGTBCJJ

Maybe one of your first public discussions could in front of the select committee that has asked you several times to appear?

Meanwhile, Twitter user @halikghinwa hopes aspects of the 2018 challenge that haven’t been accomplished would spill over to this year:

I really hope this doesn't mean that the 2018 challenge and efforts on "addressing important issues around #elections, #speech, #privacy and wellbeing" at #Facebook are over now..

In a time when people are getting more paranoid because Facebook has been sharing their DMs, private photos, and other data, shouldn’t Zuckerberg do better than just “talk with leaders, experts, and people in our community from different fields” and “put myself out there more than I’ve been comfortable with and engage more in some of these debates about the future,” and actually do something more concrete to protect people’s data and privacy? As Zuckerberg himself wrote, “given the importance of what we do, that doesn’t cut it anymore.”