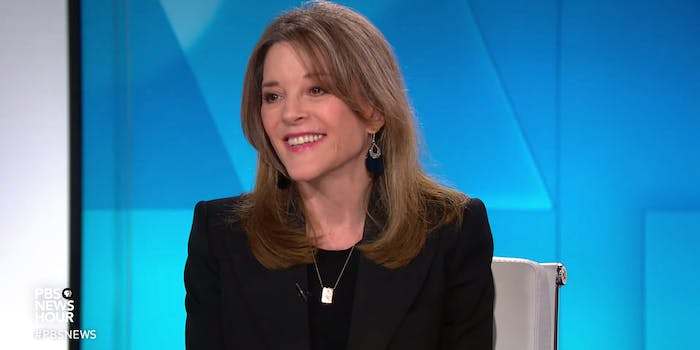 The self-help influencer ran a controversial and applauded-online campaign.

What grew into an ironic movement, became the subject of warnings from concerned groups, and recently fizzled has come to an end.

Marianne Williamson is no longer running for president.

She announced the suspension of her 2020 campaign on Friday in a blog post.

I ran for president to help forge another direction for our country. I wanted to discuss things I felt needed to be discussed that otherwise were not. I feel that we have done that.

I stayed in the race to take advantage of every possible effort to share our message. With caucuses and primaries now about to begin, however, we will not be able to garner enough votes in the election to elevate our conversation any more than it is now. The primaries might be tightly contested among the top contenders, and I don’t want to get in the way of a progressive candidate winning any of them.

As of today, therefore, I’m suspending my campaign.

Williamson became somewhat of a Twitter phenomenon, as people both enjoyed her new-age outlook, the first person running for president who spoke more as a guru than a political candidate. She said “love” was the only way Democrats would defeat President Donald Trump, spoke about national public healing that needed to take place, and called the modern political climate the work of “dark, psychic forces.”

The first-time candidate had her fair share of inexperienced gaffes that endeared her to the internet, if not the public at large. But as she grew a bit in stature, qualifying for several debates, advocacy groups began to point out her anti-vax stance, and her negative views on modern medicine, considering her more of a danger than the lark people were treating her as.

And her candidacy was mourned by the same people who relished her unorthodox rise.

"Campaign staff of two unpaid interns, a dog, and a taxidermied ferret made unemployed by this, the most predictable event in politics." https://t.co/Uelw9KCvAf

Who's going to pick up the slack and bring the crystal energy to the election now?? https://t.co/2HjfkVPVMZ

Williamson said in her statement that her run left her “more convinced than ever that we’re a good and decent people.”