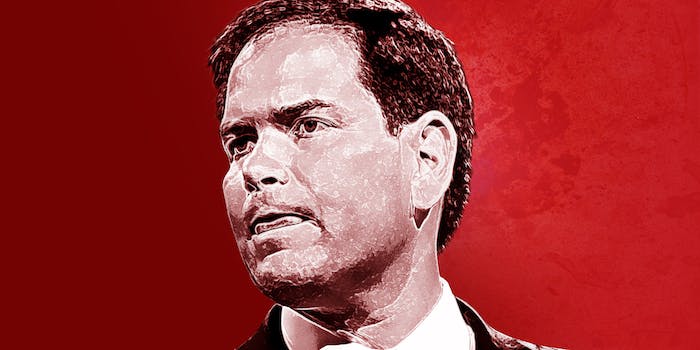 Marco Rubio: We need to add to U.S. surveillance programs

'We need additional tools for intelligence.'

Republican presidential candidate Marco Rubio wants to add American surveillance programs, many of which were created after 9/11 and curtailed in 2015’s USA Freedom Act.

“We are now at a moment in this country where we don’t just need to keep the authorities we already have, we need to add to these programs,” Rubio argued.

He invoked a recent shooting of a Philadelphia police officer by a man who allegedly pledged allegiance to the Islamic State. “This the kind of threat we now face in this country,” Rubio said. “We need additional tools for intelligence.”

Rubio has long criticized his rival Cruz for the latter’s support of curtailing U.S. government surveillance. He said the USA Freedom Act made Americans less safe and that the Islamic State would be happy with the law.

Early last year, Rubio said he wanted to permanently extend National Security Agency (NSA) mass surveillance. In the wake of terrorist attacks in Paris, California, and around the world, Rubio’s position now is to not only extend the NSA’s mass surveillance but to expand it. However, he didn’t offer specifics on what programs he would expand or which tools he would add to the American intelligence arsenal.

Rubio’s positions are controversial even within the Republican presidential race that has made national security the spotlight issue. Cruz and Sen. Rand Paul (R-Kentucky) are Rubio’s most vocal opponents on this issue.

In Sunday’s interview, Rubio easily transitioned from speaking about surveillance programs to Edward Snowden, the former NSA employee whose 2013 whistleblowing can be significantly credited for the subsequent efforts to curtail the American intelligence surveillance apparatus he revealed.

Less than a month away from the first primary votes being cast in Iowa, Rubio sits at third place in most national and Iowa polls.

Image via DonkeyHotey/Flickr (CC BY 2.0)