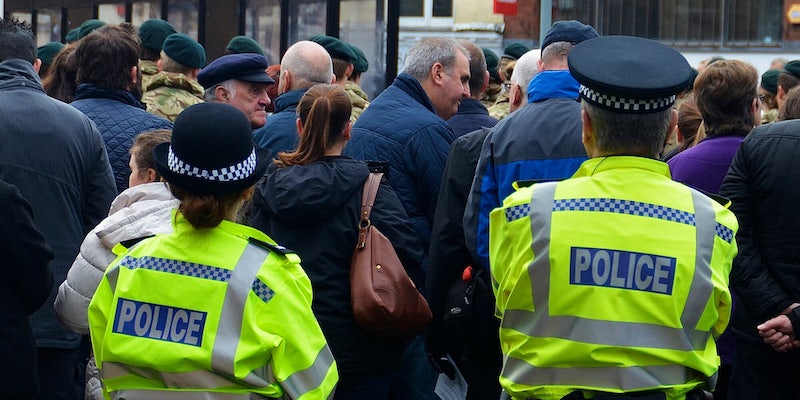 Police in the U.K. are trying out a controversial facial recognition system.

A U.K. man was fined by police for telling them to “piss off” after he was confronted for hiding from a facial recognition camera.

The man, who happened to walk past the camera as it was being tested in the East London town of Romford, was approached by officers after pulling his sweatshirt over his face.

Despite police originally telling the public that “anyone who declines to be scanned will not necessarily be viewed as suspicious,” witnesses told the Independent that several people were stopped for doing just that.

A placard near the camera, which was set up inside a police van, let pedestrians know that a facial recognition trial was taking place. Officers say they are using the system in order to locate wanted criminals.

Silkie Carlo, director for the campaign group Big Brother Watch, was on scene to monitor the camera’s trial and saw the incident with the man take place. He says the man, who was forced to give officers his identification, became visibly upset over the confrontation.

“The guy told them to p*** off and then they gave him the £90 public order fine for swearing,” Carlo said. “He was really angry.”

Police appeared to justify their actions in a statement to the media, arguing that the man had made threats during the stop. “After being stopped the man became aggressive and made threats towards officers,” police said. “He was issued with a penalty notice for disorder as a result.”

The eight-hour trial reportedly resulted in the arrest of eight people, “although only three were a direct result of facial recognition technology,” the Independent notes.

Activists from another human rights group in the area also alleged that one individual was detained and later released for allegedly looking “like someone” on a watchlist, calling into question the camera’s accuracy.

Scotland Yard says it will “continue to engage with many different stakeholders, some who actively challenge our use of this technology,” as it moves forward.