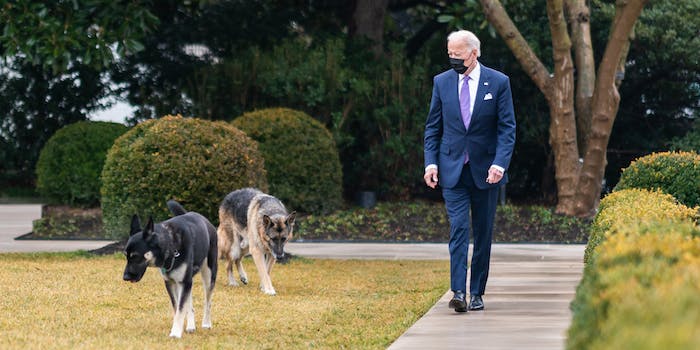 One of the most popular stances among centrists Democrats in the 2020 election was that the smart move was to nominate Joe Biden so that he could defeat Trump, then, once he was in office, push him left.

The take recognized the popularity of progressive positions in the election, but posited Biden was uniquely suited to defeat Trump and that nominating anyone too far left was a recipe for disaster.

Well, Biden won. And so far there’s been a an immigration crisis at the U.S. border, a lack of coronavirus relief, a punt on student debt relief, and no talk about progressive healthcare positions.

And now Biden just kicked the most aggressive anti-police advocate out of his White House. Apparently Major Biden—Biden’s German Shepherd—has been removed from the White House and returned to Delaware after he bit a security guard.

Biden’s other dog was alsor removed and returned to Delaware. And while many could see it as an understandable outcome of a dog being thrust into a high-stress environment, others just wanted to note that Biden’s dog took a more stridently anti-police stance then the president did, despite police reform being a major flashpoint of the 2020 election.

This week, the House passed the George Floyd Justice in Policing Act. It still needs to pass the Senate, and it’s unclear whether Biden will sign it, especially now that Major Biden has left the administration.