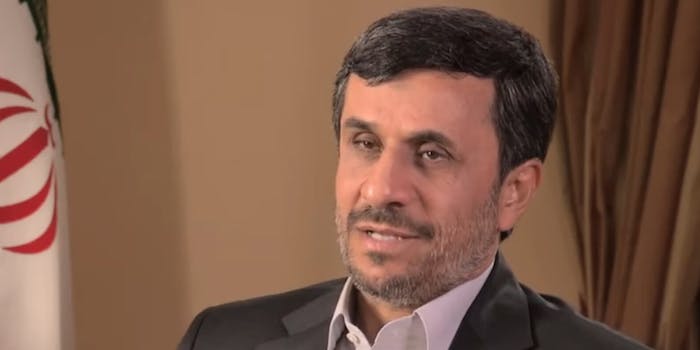 'Well this is weird'

There’s the occasional comment on current events, a number of @s to President Donald Trump, and several tweets about American sports.

But on Thursday, Ahmadinejad decided to wish former singer Michael Jackson a happy birthday by tweeting the lyrics to Man In The Mirror, and it caught the attention of some people on Twitter.

“‘I’m starting with the man in the mirror I’m asking him to change his way’ #HB #MJ” he wrote on Thursday morning.

Oddly enough, this isn’t the first time Ahmadinejad and Jackson have been linked. In 2010, the former Iranian president’s website was hacked by someone who appeared to be a fan of the singer, according to MTV.

A message was left on Ahmadinejad’s website lamenting that Jackson died and asking God not to “forget” about the Iranian president.

It’s also worth noting that Ahmadinejad was criticized for human rights issues while leading Iran and has denied the Holocaust happened.

Regardless, Thursday’s tweet had some people wondering what was going on.

Someday I want to meet whomever it is that manages Ahmadinejad's Twitter account. So many questions…. https://t.co/FAK7FEpdhe

What a time to be alive https://t.co/1KTOL8DKIo

Is mercury in retrograde or what https://t.co/L0aUV6CTK4