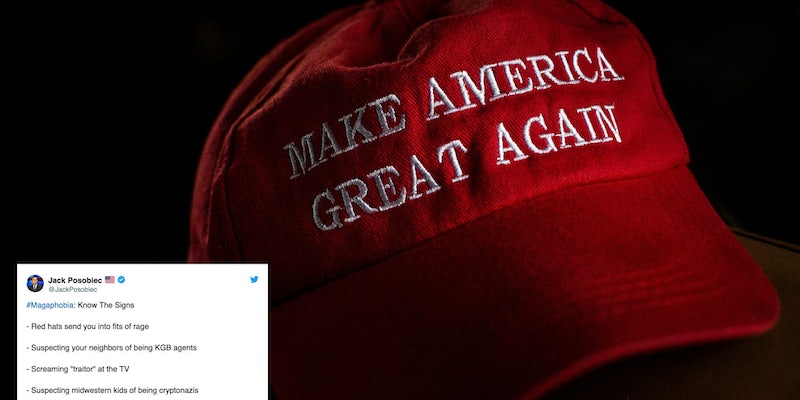 The president’s son, Donald Trump Jr., claimed on Monday that a person could not walk the streets of downtown Chicago in Trump gear without getting shot. While that statement was met with ridicule for the hyperbole it was, it echoed a sentiment that has been percolating online among Trump’s biggest supporters.

One of Trump’s most ardent fans and extremely online right-winger Jack Posobiec began tweeting about it in the wake of both the Jussie Smollett hoax and a conservative supporter getting punched in California. It’s a way to show how Trump’s opponents are driven mad by people’s support of the president.

– Red hats send you into fits of rage

– Suspecting your neighbors of being KGB agents

– Screaming "traitor" at the TV

– Suspecting midwestern kids of being cryptonazis

Others picked up on it.

America has seen a rise in hate crimes since Trump took office, with a 17 percent increase in 2017. But don’t tell that to persecuted MAGA stans who can’t see beyond their own myopic world view.

It was when Posobiec asked his followers for instances of #Magaphobia that his panicked proclamations of victimization were revealed to be as banal as can be.

Once my family found out I liked Trump, they started harassing me on a daily basis. My nephew that who goes to a liberal arts school, I think he's gay, blocked every channel except for Bravo on my TV. I had to pay $50 for a tech to come fix it.

Kavanaugh- I’ll never get past what they did to that man and then it was oh well on to the next.

Not being able to tell friends and neighbors we support Trump for fear of retaliation against our kids.

My husband wore a MAGA shirt. One of our customers saw him in it and stooped bringing his dog to our doggy daycare

Fears of tense family dinners and TV shows with viewpoints that you disagree with were the most Posobiec’s fans could come up with. He also started to get trolled.

Taco Bell REFUSED to give me an English language menu. If anyone knows the English words for tacos, tortillas, burritos, and cinnamon twists, please let me know. This is America and we (as should all menus) speak English!!

I tried to hunt the homeless for sport and the police told me that was illegal. Guess they never heard of the 1st Amendment. #Magaphopia

While Trump supporters have faced instances of violence, they support a president who has been rabid in inciting his base of followers to commit acts of violence against journalists and his political opponents and has stoked fear toward people of color.

Nothing any Trump supporter—people who are largely white and male (like Posobiec)—has faced compares to anything persecuted minorities in America experience.