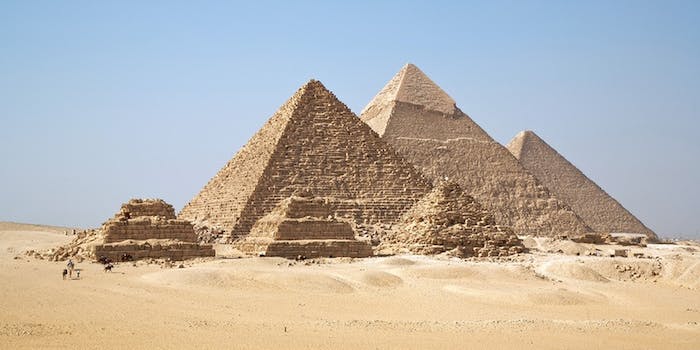 "If they were legal they would have used proper papers and have sold them through Sotheby’s or Christie’s..."

If you’re into Egyptian tomb archaeology, you’re kind of into grave-robbery. Most of the greatest artifacts you see in American and European museums were discovered by Western archaeologists in the early twentieth century, at which point those mummies and works of art were shipped overseas. A lot of the time, the line between archaeology and tomb raiding was rather blurred.

These days, more attempts are made to keep Egyptian artifacts in Egypt, or at least for them to be sold legally rather than stolen and passed through the black market. Unfortunately, eBay provides an easily accessible conduit for buying and selling stolen artifacts without having to jump through any legal hoops.

A report from the Daily Beast reveals that since the 2011 revolution, hundreds of objects from ancient Egyptian tombs have been stolen and sold on eBay. Looters took advantage of the rioting to steal antiquities that have been in the country for thousands of years, and organized gangs employed people to dig for treasures at the source.

A “repatriation team” was tasked by the Egyptian government to hunt down these relics and have them removed from eBay, but many inevitably slipped through the cracks and end up being sold to overseas collectors.

Archaeologist Monica Hanna estimates that 4,000 artifacts have been sold illegally on eBay, telling the Daily Beast, “If they were legal they would have used proper papers and have sold them through Sotheby’s or Christie’s, where they would get more money.” Hanna has launched a Change.org petition requesting new import restrictions between Egypt and the U.S. that would make it harder for looters to sell their spoils online.

A quick eBay search reveals that there are plenty of ancient Egyptian statues and carvings selling for tens of thousands of dollars, but it’s impossible to say whether or not they are the products of looting. Many claim to come from private collections or come with guarantees of authenticity, but others are just listed with simple descriptions. The most easily located items have likely been reported and removed from the site already, but with Egypt having lost an estimated $3 billion to looting so far, it seems that they may be fighting a losing battle.