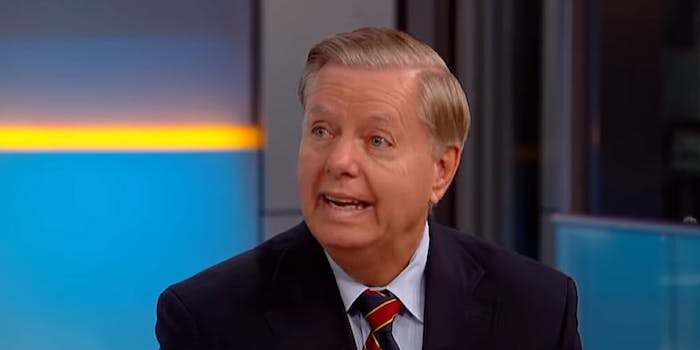 People weren't happy with his comments.

Sen. Lindsey Graham (R-S.C.) joked on Tuesday morning that his ancestry would show that he was Iranian if he took a DNA test, adding that it would “be, like, terrible.”

Graham made the comment when speaking on Fox & Friends. The joke came after Sen. Elizabeth Warren (D-Mass.) made public the results of a DNA test she took that showed she had Native American ancestry in light of President Donald Trump routinely mocking her as “Pocahontas.”

“I’m going to take a DNA test,” the senator said. “I’ve been told my grandmother may be part Cherokee Indian. It may be just talk. You’re going to find out in a couple weeks, because I’m going to take this test. I’m taking it and the results are going to be revealed here. This is my Trump moment, this is reality TV.”

“I didn’t really think much about it. But she is less than one-tenth of 1 percent. I think can beat her.”

Graham ended the segment by cracking his joke—which was called bigoted by people online.

“I’ll probably be Iranian and that would be, like, terrible.”

The senator’s remarks were not met well with people online.

Yes, terrible for Iran or any other people who might be associated in any way with a moral worm and sycophant like Lindsey Graham.

WOW — Graham ends his 'Fox & Friends' interview with some gross, casual bigotry. After announcing he plans to take a DNA test, Graham says, "I'll probably be Iranian. That'd be like, terrible."

Well @LindseyGrahamSC thanks for insulting the heritage of a bunch of your constituents in #SouthCarolina. Glad to know you think me being Iranian-American is terrible. @LeylaGulenFOX24 @FoxNews https://t.co/wSvxpFIjS5

It’s been a big few weeks for Graham, who catapulted into the national conversation when, during the confirmation hearings for Supreme Court justice Brett Kavanaugh, he became a hero to the far-right.