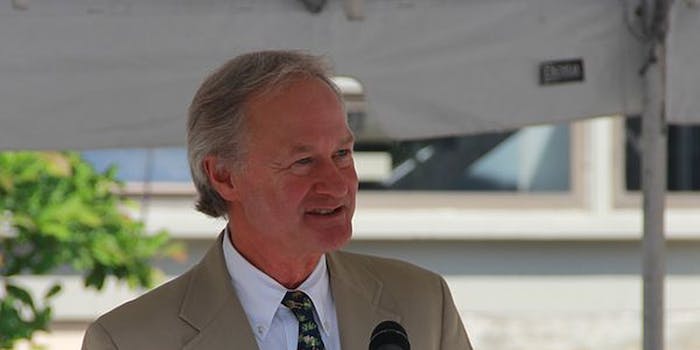 On Wednesday afternoon, the field for the 2016 Democratic nomination for president got a little more crowded as former Rhode Island Governor and Senator Lincoln Chafee officially announced his bid for the Oval Office.

In his announcement speech at George Mason University, Chafee outlined a number of policy positions. One of the most instantly eye-catching was his take on former National Security Agency contractor Edward Snowden. In 2013, Snowden leaked a trove of internal NSA documents to journalists about the agency’s electronic surveillance programs. In the years since, he has taken asylum in Russia, protected by Russian President Vladimir Putin.

And he didn’t mean in handcuffs, as he tweeted one day prior:

Congratulations to Congress for standing tall for civil liberties! Now let's bring Snowden home. He has done his time. #chafee2016

Chafee started his political career in the GOP. After being appointed to fill the seat vacated by his father’s death in 1999, Chafee was regularly rated as most liberal Republican in the Senate. He declined to support President George W. Bush in the 2004 election, instead writing in the name of the the president’s father, George H.W. Bush, on his own ballot. After he was defeated in a re-election fight against Democratic challenger Sheldon Whitehouse in 2006, he became an independent and successfully ran for governor of the state in 2010. A co-chair of President Barack Obama‘s re-election campaign in 2012, he switched to the Democratic party the following year; but, in the face of sagging poll numbers, Chafee announced he would not seek re-election.

Chafee’s stand on Snowden puts him decidedly to the left of frontrunner Hillary Clinton. Clinton, who served as secretary of state when Snowden leaked his documents to journalist Glenn Greenwald and documentary filmmaker Laura Poitras, has said that Snowden could return to the United States if he was willing to stand trial.

“If he wishes to return knowing he would be held accountable and also able to present a defense, that is his decision to make,” Clinton told the Guardian last year.

Chafee’s insistence that Snowden be granted leniency puts him in line with the position taken the race’s progressive, Vermont Senator Bernie Sanders. “In my view, the interests of justice would be best served if our government granted him some form of clemency or a plea agreement that would spare him a long prison sentence or permanent exile from the country whose freedoms he cared enough about to risk his own freedom,” Sanders said.

Federal prosecutors have charged Snowden with three felonies—theft of government property, disclosing intelligence information, and giving classified information to an unauthorized party. Each charge carries of sentence of up to 10 years in prison.

In addition to Snowden, Chafee’s speech saw him laying out a platform that included his opposition to the Iraq War, the cessation of military drone strikes, and moving the United States to the metric system. (If you’re laughing at the metric system, that’s your prerogative. But, pop quiz hotshot, how many tablespoons are in a pint?)

Chafee also dinged Clinton for her ongoing email scandal. “Our State Department just has to be above all controversy,” he said, “and it’s regrettable to me what’s happening now with emails, with the foundation that affects decision-making coming out of State. We just can’t have that.”