Lil B on his hot new vegan-themed emoji app

“I don’t like to align myself with companies, but I really support what they are doing."

If you thought Basedmoji, the sticker app from Bay Area rapper Lil B, was the artist’s first and only foray into emoji, you were wrong. This week Lil B (real name Brandon McCartney) released another app: vegEMOJI, a vegan-themed emoji app.

VegEMOJI is the product of a partnership with Follow Your Heart, a vegan food company based in L.A. “I don’t normally like to align myself with companies, but I really support what they are doing,” Lil B tells the Daily Dot.

While the rapper isn’t vegan (I had to ask), he says he’s been trying to cut down on processed foods and admitted he’s “ashamed of eating meat.” Despite remaining a carnivore, Lil B says Follow Your Heart has been an inspiration to him, and working with the company was a natural fit. “I only want to do things that help people, so sometimes my projects take me awhile,” he says.

Originally, Follow Your Heart reached out to Lil B, but he was quickly on board. “I wanted to do something to bring their company into pop culture awareness,” he explains.

The emoji pack is full of adorable, vegan-endorsing stickers. My favorite simply reads “cool people are kind to animals;” he tells me one of his favorites comes from Basemoji: “Let’s adopt a dog.” Lil B tells me that he helps design all of his apps and gets coding help from his business partner, so it’s a two-man emoji operation. He says he’s learning to code himself, which is fitting for Lil B, who’s quickly becoming something of an app entrepreneur. 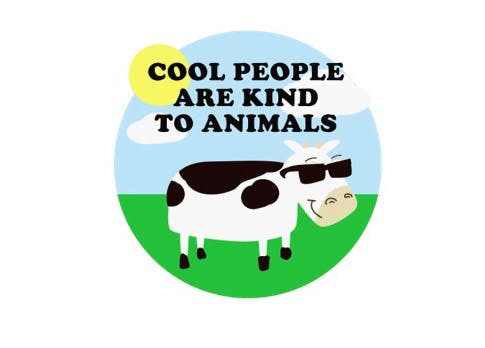 You can’t thumb your way through the App Store without flicking through a number of celebrity-affiliated apps. There’s your top shelf variety, like Kim Kardashian: Hollywood, and then there are the infinitely more desperate, like Robbie Williams’s racing app. Even the novelties out there, like Snoop’s app or Taylor Swift’s app, can’t escape a certain aura of money-grubbiness. They’re each insular, entirely self-promotional.

But if Lil B is anything, it’s undeniably genuine. With vegEMOJI, there’s no Based God branding involved; his support for Follow Your Heart and interest in app creation are what spurred the relationship. VegEMOJI isn’t the last app you’ll see from Lil B. He recently updated Basedmoji to include tour dates and added some new stickers, and says a video game as well as a handful of new apps are in the works. When I asked if he’d consider making an app album, he says “not right now.” But I wouldn’t be one to rule it out.

“I’m always a part of tech, manipulating it in my own way,” he says. “I’ve been in the Internet since Web TV.”