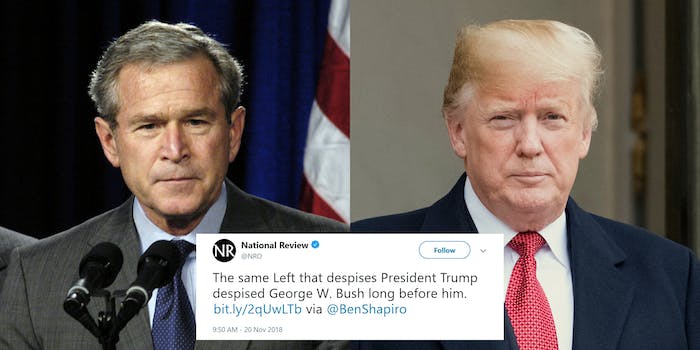 Ben Shapiro thinks he has a point.

By a great number of metrics, George W. Bush’s presidency was disastrous. He started a war in the Middle East that’s still going on today, under a willfully disingenuous pretext. He presided over the complete collapse of the U.S. economy.

Even if you believe he “kept America safe,” (a standard conservative defense), he was in power when the worst terrorist attack to ever hit the U.S. occurred, and he responded to it by creating a police state, a surveillance state, an endless war, and torturing suspects.

So, if you dislike him, it seems like a reasonable reaction to his presidency. But does it also mean your criticism of President Donald Trump is completely invalid?

Here’s the reality; the same Left that despises President Trump despised George W. Bush long before him. For the most part, the talk about Trump disgracing the office, the talk about Trump’s toxic personality, the talk about Trump’s divisiveness — all of it is just a cover for the fact that those on the cultural left despise those who aren’t on the political left. They see them as idiots and rubes (W.), or as evil manipulators (Cheney). For them, Trump isn’t an outlier — he’s merely the latest iteration of the dastardly conservative movement that launched with Nixon, extended through Reagan, grew to Bush, and now culminates in Trump.

To which liberals online said… Yup!

Fucckk, they got us. Owned by our own logic. https://t.co/oypvsPcZCn

Trying to imagine how confused someone in 2008 would be if you told them a decade later people had to be continually reminded that George W. Bush was a very bad president. https://t.co/k2MAro4J7z

"the same people who are opposed to white nationalist government also had some kind of big problem with pointless elective wars that killed millions and motherfucked an entire region of the planet for the forseeable future. i mean it's like, pick one, you babies"

Guys. I'm sorry. I was stuck in an elevator with Ben and I spilled the beans.

Shapiro’s article doesn’t address any of the substantive criticisms of Bush and Trump but rather assumes the conclusion that the vitriol for them is an inherent acrimony toward conservatives and not, say, policies conservatives espouse and implement.

Shapiro manages to write about how the left hated George W Bush without once mentioning any policies that drove the opposition — like, say, the two catastrophic and pointless wars he started that were never paid for and for which no one was held accountable https://t.co/bzK01si9o0

Bush and Trump (and conservatives, because that’s who they are) have a great deal of overlap in policy. Trump is attempting to bring back the deregulated financial markets that collapsed under Bush. Trump wants to reinstate abhorrent torture policies that Bush allowed the CIA to implement. They both have a penchant for using the military for their own political stunts, and the two of them have passed tax cuts that were geared toward the wealthy and corporations.

It would be natural to dislike both them, and it’s a point Shapiro accidentally makes.

Trump, for the Left, isn’t a departure from conservatism. He’s just another variation on a theme: All conservatives are evil.

Which is why liberals dislike him. Not because Hollywood tells them to.