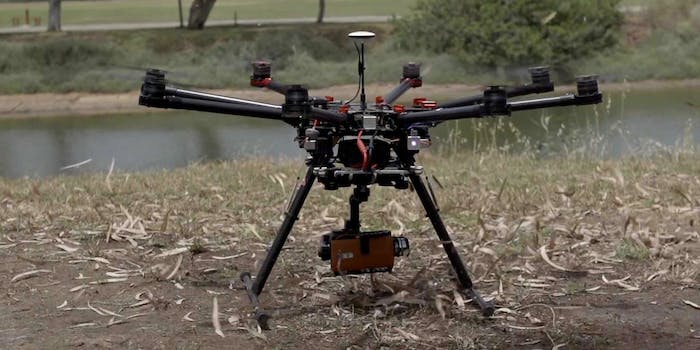 LG believes that its latest smartphone, the G4, has a pretty great camera. To prove it, the company strapped the handset to a drone and sent it out to capture some beautiful aerial footage.

The G4’s primary camera relies on a 16-megapixel lens with an impressive f/1.8 aperture. LG says it’s the first U.S. smartphone to sport such a feature. The aperture allows more light to enter the lens, which produces better low-light performance. The phone also counts on a color-spectrum sensor to reproduce colors as accurately as possible.

Here’s the test flight, in which the G4 shows off its unusual ability to record 4K ultra-HD (UHD) video footage.

The video also appears to show off the camera’s manual mode, which gives expert photographers additional control over the camera with DSLR-like advanced settings.

If you don’t want to slap your smartphone onto a drone and fly it hundreds of feet above the ground, you can always just use the 8-megapixel front-facing camera and take some selfies instead.

LG has been touting the G4’s camera as a major selling point for the phone, which was released earlier this year. The company has also been running a photography contest that will give the person with the best Instagram photo two LG G4s and a trip to New York.