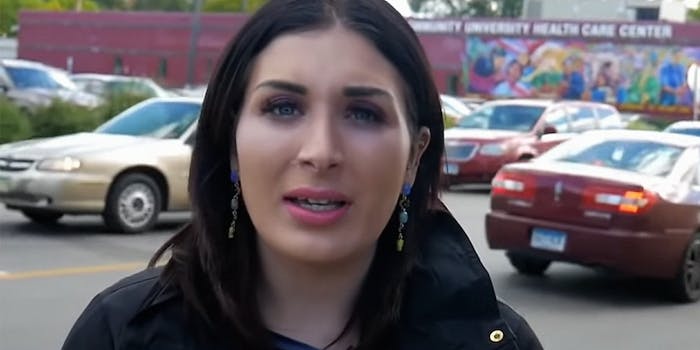 The WSJ may have been pranked in the process, too.

Last week, the Wall Street Journal published a scoop on how social media sites handle far-right voices that ricochet around the web. In it was a shocking anecdote: A lobbying group, the Council on American Islamic Relationship (CAIR), personally met with Twitter to get right-wing personality Laura Loomer banned from the site.

However, according to a new report by Right Wing Watch, it may have just been a prank played on Loomer, which accidentally made its way into the Wall Street Journal.

Conservative Jewish activist Laura Loomer says she didn’t know until recently that outside groups and individuals had privately lobbied Twitter executives to remove her from the site in late November.

In an email to Ms. Loomer, Twitter said she had violated its hateful conduct policy for a tweet calling Ilhan Omar, the Muslim congresswoman from Minnesota, anti-Jewish and supportive of Shariah law.

Among the groups that had complained to Twitter was the Council on American-Islamic Relations, an advocacy organization.

Twitter’s email to Ms. Loomer didn’t mention the behind-the-scenes discussions. After her suspension, she handcuffed herself to Twitter’s New York headquarters in protest. Police cut her free from the handcuffs after two hours.

But the information that CAIR had spoken directly to Twitter about Loomer may have come from a prominent internet prankster, Nathan Bernard, according to Right Wing Watch.

After Loomer’s handcuffing stunt, Nathan Bernard and his associates, who say they seek to rile up and expose right-wing figures through a media operation they’ve dubbed “Bernard Media,” got to work devising a prank in which they would pose as a Twitter employee named Brad and seek to convince Loomer that “Brad” could help get her account reinstated. As the prank wore on and Loomer continued communicating with Bernard and his friends, they devised a plan to see how hard it would be to play off her anti-Muslim attitudes and convince her that Muslim groups were directly responsible for her suspension.

The alleged prank went so far as to include a forged calendar of Twitter CEO Jack Dorsey’s schedule, claiming he’d met with CAIR representatives.

Since December, Bernard and his friends exchanged hundreds of text messages with Loomer and spoke with her on the phone for nearly a half-hour, a conversation in which they offered deadpan confirmations of all conspiracy theories Loomer suggested to them about Muslim groups’ responsibility for her suspension. They even sent her a fabricated appointment calendar they said showed Twitter CEO Jack Dorsey’s schedule, and it included a notation for a meeting with CAIR on a date just days before Loomer’s suspension from the platform.

However, representatives with CAIR said they merely flagged Loomer’s tweets as offensive, a standard reporting practice available to anyone on the site.

Regardless, the story of CAIR and Twitter made its way up to the Wall Street Journal, which spoke with Loomer for a larger story about the way tech companies were handling a currently fraught dynamic—where action against conservative voices gets branded as “censorship” and inaction gets deemed acceptance of hate speech.

In other words, Loomer doesn’t want to believe she was pranked.