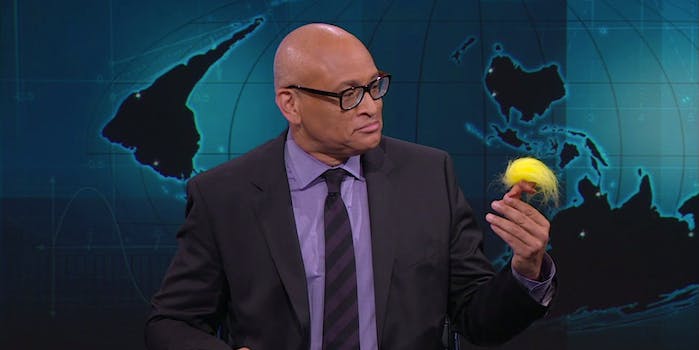 Larry Wilmore has a simple message for Donald Trump’s supporters

He's just as confused as the rest of us.

Even after the latest fallout from the first GOP debate, Donald Trump is more popular in the polls than ever, to the utter bafflement of Larry Wilmore.

Millions tuned in Thursday night to see Fox News moderator Megyn Kelly grill Trump about his disdain for women—and watched as he proved her point, making a “thinly veiled threat” and suggesting that Kelly was on her period. Sure, Wilmore may call him a literal troll (with a troll doll to display the similarities in their hair) and he might be entertaining for us all, but he’s still rising in the polls.

“Let me just sum up what we’ve gone through in the last month and a half,” Wilmore said. “So far, Trump’s called Mexicans rapists, he attacked one of America’s most beloved POWs, he gave out a sitting senator’s phone number out of spite, and now he basically blamed a woman’s tough questioning on her period. And his polls just go higher and higher and higher.”

If any of Trump’s political gaffes happened to most of the other candidates, it would’ve ruined their chances at running for office. Trump’s made all of them, and he’s leading the pack. But as much as we want to watch primary season go up in flames, Wilmore has one message for the people: Stop it.