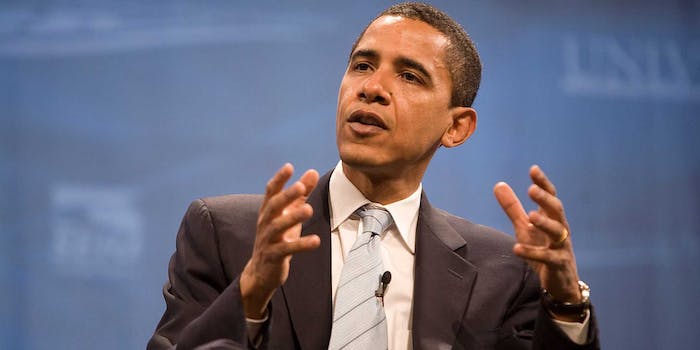 This is probably not going to work.

A conservative activist wants to have President Barack Obama deported based on the theory that he was not born in the United States.

This alone would not really be news. If you opened any chain emails from your right-wing cousin during the first few years of the Obama presidency, you’re probably well aware that a segment of the American public has long believed that Obama was born much closer to Nairobi than Honolulu.

Unlike attorney Larry Klayman, however, your right-wing cousin probably isn’t one of the leaders of the legal charge to end the National Security Agency’s (NSA) bulk collection of Americans’ phone call data, nor is he likely to end up arguing the issue before the Supreme Court.

Last year, Klayman received the most significant legal victory against the post-Edward Snowden surveillance state when his organization, Judicial Watch, successfully convinced a federal judge that the NSA bulk collection of the phone records of nearly all American was most likely unconstitutional.

The government has appealed the decision and, while that appeal is making its seemingly inevitable way up to the Supreme Court, Klayman has elected to keep himself busy by sending a letter to the Department of Homeland Security last week to look into the Obama’s citizenship status.

The four-paragraph letter charges that, because the president was born in Kenya, he applied for and obtained a passport under false pretenses—a deportable offense. It reads:

“Thus to maintain the confidence of the American people and for the benefit of the country’s democratic system, we ask that the Department conduct a comprehensive investigation, convene a full evidentiary hearing as provided by law, and initiate removal and deportation proceedings of Barack Hussain Obama.”

Klayman backs up the letter with references, such as books by author Jerome Corsi; and affidavits from Mike Zullo, who led a task force, commissioned by controversial Phoenix-area Sheriff Joe Arpaio, into Obama’s citizenship.

It should be noted—as it already has been numerous, numerous times before—there have yet to be any serious, credible evidence made public that Obama was born outside the United States. (And yes, his long-form birth certificate has been released—on the White House website.) Even so, according to a recent Rasmussen poll, about one-quarter of Americans believe Obama is foreign-born. Roughly the same percentage of respondents said the U.S. government knew about the 9/11 attacks ahead of time and intentionally did nothing to stop them from occurring.

Klayman, who worked in the Reagan Justice Department, did not immediately respond to a request for comment.

In addition to trying to get the president booted out of the country, Klayman has taken a number of high-profile cases over the years. He represented alleged former Bill Clinton mistress Jennifer Flowers in a defamation lawsuit against Hillary Clinton. He filed a lawsuit aimed at the blocking construction of the so-called “Ground Zero Mosque,” an Islamic cultural center in lower Manhattan that’s became a flashpoint for conservative activists during the run-up to the 2010 midterm elections. And he filed a $1 billion lawsuit against Facebook for failing to remove a user-created page calling for a third intifada against Israel.