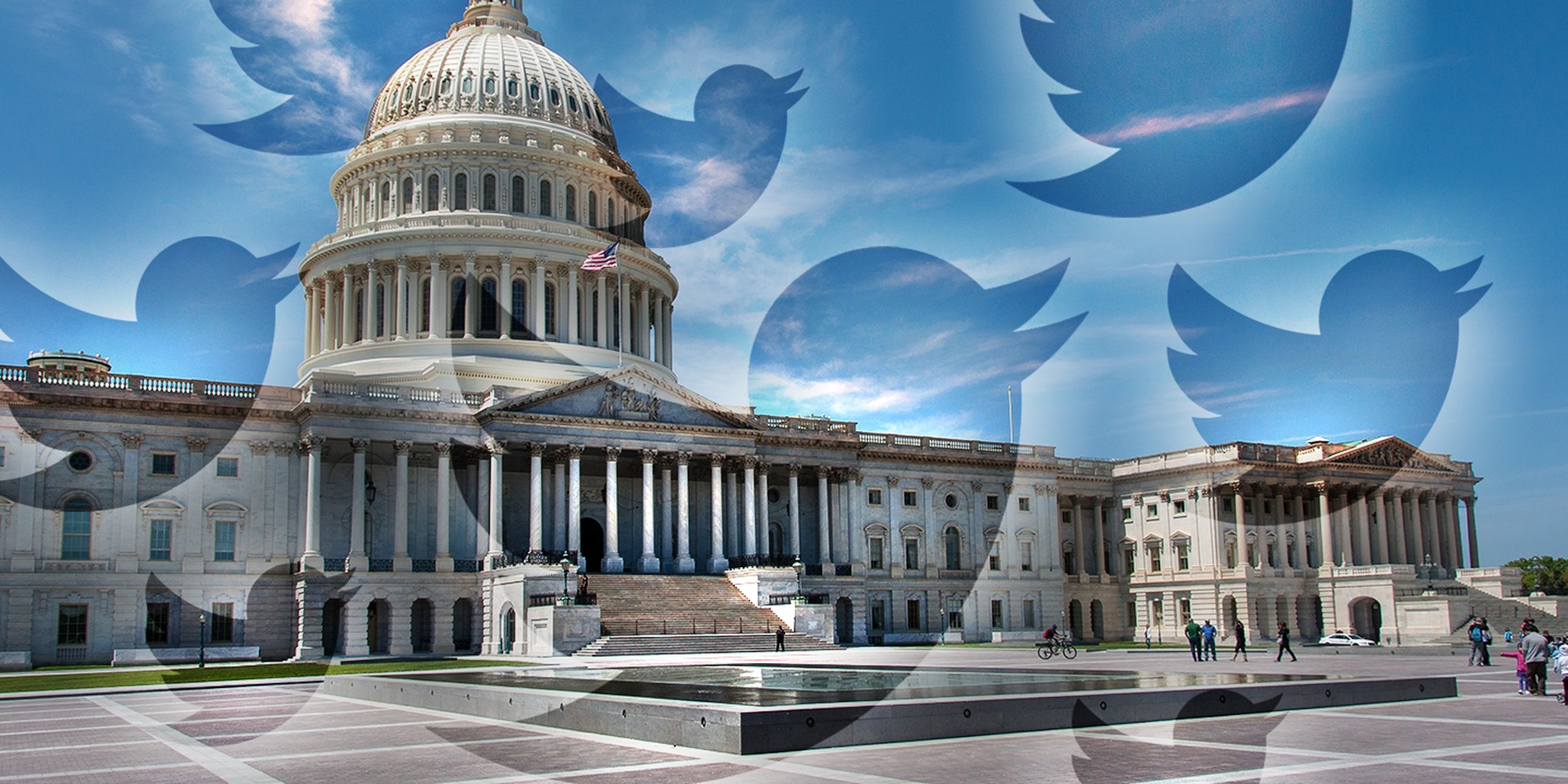 On Monday, the congressman from Texas drafted a letter to National Science Foundation Director France Cordova demanding to know why nearly a million dollars was endowed to computer scientists at Indiana University who, Smith says, may have “contributed to suppression of online free speech” of conservative groups.

Stifled free speech? That sounds like a terribly abortion of Americans’ rights! Problem? Smith seems to have zero idea what he’s talking about.

For all the talk about free speech, the congressman appears to be troubled mostly by the project’s name: “The Truthy Project.” Smith dedicates his second paragraph to explaining how the term was borrowed from “political satirist” Stephen Colbert before launching into the meat of his complaint.

“Truthy was used to target political messages and commentary connected to ‘Tea Party,’ ‘GOP’ and ‘conservative,’” notes Smith. The congressman adds that the Truthy Project “could be used to understand disaster communications or to assist law enforcement” (emphasis his), but instead, he says, “focused on examples of ‘false and misleading ideas, hate speech, and subversive propaganda’ of conservative groups.” That focus, Smith says, is evidence of foul play.

Researchers did, in fact, credit Colbert with coining the word; however, their definition deviates slightly from that of Smith’s, in that it “describes claims that feel like they ought to be true, but aren’t necessarily.”

The Truthy Project began in 2010 using visualizations and other data tools and resources to “study how memes spread on social media.” A meme, the researchers explain, “is a transmissible unit of information, such as a hashtag, phrase, or link.”

Why are scientists at Indiana University studying memes under a public grant? As with everything else, it’s all Obama’s fault.

In 2008, then-Senator Barack Obama launched a successful bid for the White House with a tech-savvy online campaign that employed the use of social media, essentially pioneering the use of the Internet as a means to becoming President of the United States.

The first application of the Truthy Project’s research was to evaluate “astroturfing” campaigns—“political, advertising, or public relations campaigns that are formally planned by an organization, but are disguised as spontaneous, popular ‘grassroots’ behavior.”

Of course, Fox News eventually caught wind of the project about four years after it launched, and during an Aug. 28, 2014, airing of Fox & Friends to an audience of 3.5 million estimated viewers, legal analyst Peter Johnson Jr. compared it to Joseph McCarthy’s fearmongering and George Orwell’s classic dystopian tale, 1984.

As David Uberti, writing for the Columbia Journalism Review, noted after the broadcast:

None of the journalists ‘reporting’ on Truthy last week explained the scope of the project, including more than 30 published papers, when crafting their viral output. Instead, they pointed to a two-paragraph abstract in Truthy’s $919,917 National Science Foundation grant, awarded in 2011, as evidence of a link to government surveillance programs. This has all been public since 2011 per grant rules, so it’s unclear why conservative media put it in the crosshairs now.

Orwell was invoked once again, by Ajit Pai, a Republican nominated to the Federal Communications Commission (FCC) by President Obama, in an Oct. 17 op-ed for the Washington Post.

“Hmm. A government-funded initiative is going to ‘assist in the preservation of open debate’ by monitoring social media for ‘subversive propaganda’ and combating what it considers to be ‘the diffusion of false and misleading ideas,’” wrote Pai. “The concept seems to have come straight out of a George Orwell novel.”

If there is an afterlife, Orwell is probably pissed about having his name thrown around so carelessly.

“In reality, while our basic research project is federally funded—like a lot of other university research across the country—the research is conducted by the investigators and graduate students and it is entirely public,” researchers Filippo Menczer and Alessandro Flammini told the Washington Post in a follow up aptly titled, “No, the National Science Foundation is not building an Orwellian surveillance nightmare.”

“While we focused on tweets about the 2010 elections in early studies about polarization (which looked at both sides of the political spectrum), our research has the general goal of understanding how information spreads. To this end we use aggregate data over millions of public tweets in the same way that an economist might aggregate thousands of economic transactions to study general economic laws.”

During the Truthy Project’s research on astroturfing techniques, which many people recognize as just “spam,” researchers discovered a network of computer-controlled Twitter accounts that had subverted the system’s automated detection by appending junk query parameters to the URLs, or modifying the links in a way that made them look different, but still lead to the same website.

“This particular meme was a campaign smearing a Democratic candidate for U.S. Senate from Delaware. After the scheme was uncovered by our system, the website administrator admitted to the astroturf behavior in response to a reporter,” Professor Filippo Menczer wrote in his book about the project, The Death of the Internet.

Menczer also highlighted another Twitter bot, @PeaceKaren_25, which had generated over 10,000 tweets in 4 months in support of Republican candidates. A second account, @HopeMarie_25, retweeted all of them. “This is an example of a successful Twitter bomb,” the professor wrote. “Both accounts were subsequently suspended by Twitter.”

The aforementioned accounts were suspended by Twitter, as most spambots eventually are, because they violate Twitter’s terms and conditions. Of course, that point wasn’t clarified by Washington Free Beacon reporter Elizabeth Harrington, who recently wrote that Menczer’s team had the accounts suspended, as if they had somehow gamed Twitter into doing their bidding.

Perplexingly, Rep. Smith’s letter to the National Science Foundation highlighted this aspect of the Truthy Project’s research, indicating that he apparently believes the removal of spam accounts by Twitter infringes free speech:

“Whether by amazing coincidence or on purpose, it appears that several social media accounts that were highlighted by Truthy were subsequently terminated by the owners of the social media platforms, effectively muzzling the political free speech of the targeted individuals and groups.”

Smith awkwardly continues, tossing in a few buzzwords for good measure: “It should be noted that there is significant and growing concern about the reluctance of owners of some social media platforms to limit or block free speech in any form, including threats to commit rape and murder. Against that backdrop, it would be truly shocking if NSF funds contributed to suppression of online political speech.”

Smith added: “It is also of interest that at least one prominent federal official has called recently for the federal government to regulate and limit online political speech.”

Remember, this is coming from the lead sponsor of the defeated Stop Online Piracy Act (SOPA), which was widely criticized by rights advocacy groups, such as Electronic Frontier Foundation, Human Rights Watch, and American Civil Liberties Union, for threatening free speech and online innovation.

So, did the U.S. government authorize a $1 million project aimed at attacking conservative Twitter accounts? It did not.

Is Lamar Smith wasting taxpayer money at this very moment by launching an investigation into the important work of data scientists that he apparently doesn’t understand? You tell me.