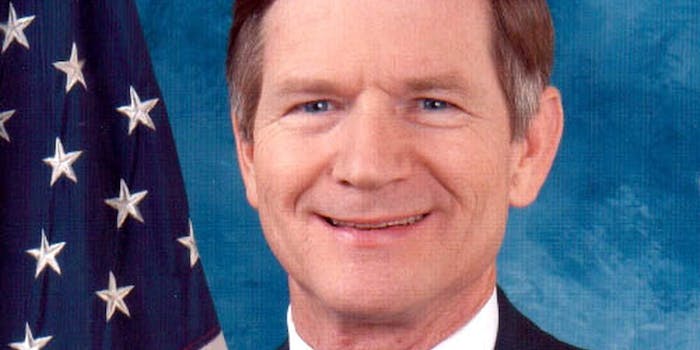 The internet’s most-hated congressman is retiring

Rep. Lamar Smith is, in many ways, responsible for the internet's political awakening.

The most despised lawmaker in internet history is leaving Congress.

Rep. Lamar Smith (R-Texas) will not seek re-election in 2018, according to an email obtained by the Texas Tribune. The congressman said in the email that he made his decision “for several reasons” and that now “seems like a good time to pass on the privilege of representing the 21st District to someone else.”

Smith rose to internet infamy in 2012 with his introduction of the Stop Online Piracy Act, better known as SOPA. The anti-piracy legislation would have targeted “foreign rogue websites” that illegally hosted copyrighted works. It mandated that internet service providers (ISPs) block these sites using something called DNS blocking, which experts—including the very people who invented the technology behind the internet—said could damage the internet’s underlying infrastructure.

Due to the technical concerns about DNS blocking and widespread concerns about censorship, SOPA sparked the internet’s first mass protest, with tens of thousands of websites, including Google, Wikipedia, WordPress, and other sites “going black” on Jan. 18, 2012.

SOPA and its companion bill, PIPA, initially had strong bipartisan support when they were introduced in late 2011. Soon after the SOPA blackout protest, the bills died without ever going up for a vote.

In many ways, the SOPA protests were the internet’s political awakening, the moment when people realized the potential online protests could have on real-world policymaking. Since SOPA’s death, we’ve come to view the internet as central to politics—for better and worse.

Smith, who serves as chairman of the House Committee on Science, Space, and Technology, percolated back into the online consciousness late last year over his rejection of human-influenced climate change and his contentious relationship with science in general.