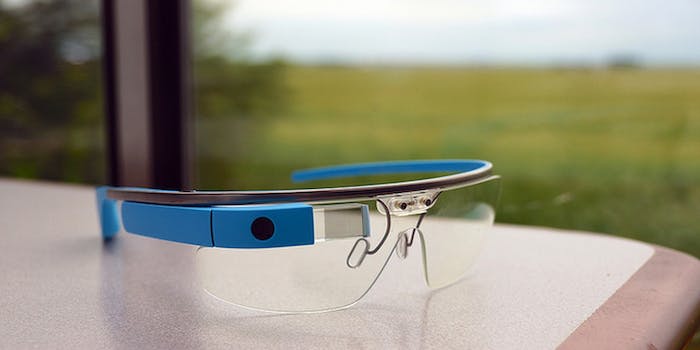 On Friday, Business Insider tech reporter Kyle Russell covered a march protesting Google employee Jack Halprin, who recently had several tenants, teachers included, evicted from a seven-unit building he’d purchased. The protest took place in San Francisco’s Mission District, and afterwards, Russell stopped by a coffee shop to work on his story. He and a colleague then started walking to a BART station, but Russell’s Google Glass attracted someone’s attention. A piece about the incident was published last night:

After more than an hour spent working on the story in a coffee shop, I arranged my laptop, camera, and notes in my backpack. Mindlessly, I put on Google Glass instead of squeezing it in with the rest of my things.

(In retrospect, I can see how that might not have been the best idea.)

The aforementioned colleague and I were on our way to the 16th Street BART station—I’ll note that I wasn’t using any device at the time—when a person put their hand on my face and yelled, “Glass!”

In an instant the person was sprinting away, Google Glass in hand.

I ran after, through traffic, to the corner of the opposite block. The person pivoted, shifting their weight to put all of their momentum into an overhand swing. The Google Glass smashed into the ground, and they ran in another direction.”

Russell lost track of the person, but filed a report with the police. He tweeted about the incident on Friday night, and while he got sympathetic responses, he also noticed a lot of anger flooding his way, and people blaming him for wearing Glass.

.@kylebrussell I’m going to shove your pathetic nerd body into a locker.

Via email, he told the Daily Dot that the responses to his piece have been mostly positive:

“With that said, even people who liked the piece have expressed frustration at my empathy towards the person who snatched and smashed my Google Glass. I’ve heard a lot of people say I should be grinding my axe right now.”

This is coming on the heels of several high-profile Google Glass incidents. In late February, Sarah Slocum was attacked while wearing Glass in a San Francisco bar, and called the incident a “hate crime.” She added fuel to the fire by later requesting that Google pay for her trip to SXSW. Last fall, engineer Nick Starr was asked to remove his device in a Seattle diner that had banned its usage. He later took to Facebook to demand his waiter be fired.

Russell’s grab-and-smash also highlights the class tensions in San Francisco right now, and the growing gap between the tech sector “haves” and the city’s “have nots.” Why is this particular piece of tech eliciting such a strong reaction?

“Google Glass came out at pretty much the worst possible time when it comes to inequality and privacy concerns, as far as I can tell,” he explains. “It’s a $1,500 toy that has some nifty features but is only available to a limited audience invited by Google. It looks kind of silly, and isn’t discreet in the slightest. As people are being priced or evicted out of their homes, it’s become a symbol for the bigger problems in the city—I think some people see techies wearing them and assume they’re somehow trying to flaunt their success. Considering the fact that Google had to tell people how they could avoid being rude while wearing it, that’s not really a surprise.”

Russell doesn’t seem to be playing the privilege card like Slocum and Starr, but rather mulling over his role in the mugging, adding a murky new layer to the issue of victim-blaming. We’re in a unique twilight stage with Google Glass—what it’s for, who can use it, what greater good can be achieved—and the invasion of privacy, especially right after an anti-Google protest, is only adding to the tension. Russell acknowledges that.

“It also puts a video camera on your face at all times,” he adds. “Thanks to the Snowden leaks, I think that people have a greater awareness of their privacy slipping away, and tend to be wary about new technologies that make it easier to collect personal data all the time.

“I’ve gotten a lot of responses—and seen a number of Twitter and Reddit comments—saying that I deserved what happened because I made people feel like they were being filmed, even though I wasn’t actually using the device at the time.”