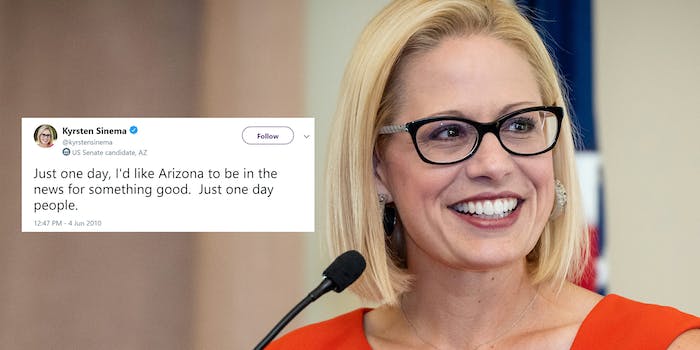 It's not the best look with less than a month until election day.

But since no one ever listens to old sayings, here’s a new one: delete your tweets. Because your old ones are probably awful and ripe for misinterpretation.

Krysten Sinema, the Democratic candidate for Senate in Arizona, is learning the hard way that what’s in the back catalog can come back to bite you, as conservatives are digging through her archive right now to paint her as anti-Arizona.

Sinema is running against Martha McSally for the late John McCain’s seat. And in a speech in 2011, it was revealed that she said people thought something in Arizona made its citizens “crazy.”

She doesn’t say people in Arizona are crazy, but rather talks about the perception of the state from outsiders.

But once word got out that she’d made some statements in the past, people went digging through her archive to find what they could.

Now, her old tweets about the state are being flagged by conservatives.

In one popular one, she said “Just one day, I’d like Arizona to be in the news for something good. Just one day people.”

In others, she was accused of bashing John McCain.

The tweets just keep coming. Kyrsten Sinema has zero respect for the people of Arizona. She’s referred to us as “crazy” and as the “meth lab of Democracy”. She has lost any right to represent Arizona #AZSen pic.twitter.com/SuYxrv1vUq

Perhaps most damning: Sinema is also a Borowitz fan. https://t.co/fZCBSKxjpw

She also was filmed quoting the Daily Show, where they called Arizona the “meth lab of democracy,” a sentiment she also tweeted out.

Oof talk about a tweet that didn't age well.#AZSen https://t.co/QDdnryUnYE

Sinema has also said many a positive thing about Arizona on Twitter.

I feel sorry for all the people who don't live in Arizona. pic.twitter.com/MXRzz9vCjB

Good or bad, delete all your tweets.