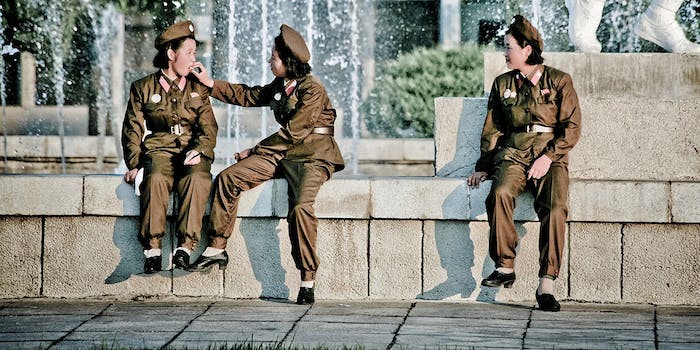 If you though Kim couldn't get more creepy, you were wrong

North Korean leader Kim Jong-un is reportedly following in the creepy footsteps of his father by founding a “pleasure squad” of young women to demonstrate his “sexual power.”

South Korea’s Chosun Ilbo newspaper reported that the group, called Gippeumjo, was disbanded following the 2011 death of Kim’s father, Kim Jong-il, and sent to work at summer villas owned by the Kim family.

The younger Kim apparently developed a taste for the group’s talents while being treated for gout last year.

The women, who were reportedly handpicked by Kim’s advisors, are currently undergoing security training at a hotel in the capital city of Pyongyang.

While the practice of keeping sex slaves has never officially been confirmed—like most of the secretive state’s other outrageous oddities—many defectors have testified to its existence.

Lee Il-nam, who attended private school with Kim in Geneva, said that the “satisfaction team” traditionally serviced not only the nation’s ruler, but also the senior leadership circle.

The girls retire at the age of 25 and sign a pledge of secrecy—apparently in their own blood—“in return for money and gifts.”

It’s unclear how Kim’s wife Ri Sol-ju, who gave birth to his daughter in 2010, feels about the idea.

In 2010, Marie Claire published the harrowing account of a 15-year-old girl who was “recruited” into one such group while Kim’s father was still in power.

“Refusal was not an option,” the article said. “Any attempt at dissent, or to defect, was an offence punishable by death.”

Once chosen, the new recruits undertake a rigorous training regimen. For six months, each young woman is assigned to one of Kim Jong-il’s many luxurious villas and palaces around the country – including his lavish secret lair underneath Mount Baekdusan on the border with China.

Many pleasure squad ingenues are sent overseas to perfect their song, dance and massage skills and then typically, if they are chosen by Kim Jong-il for full admittance into the cadre, are required to sign a pledge of allegiance in their own blood. They are then inducted into one of the teams.

“This has been going on under three generations of the Kim family ruling North Korea,” Professor Toshimitsu Shigemura of Tokyo’s Waseda University told the Telegraph, “and it has become a tradition that is also a demonstration of the leader’s power over his people and his sexual power.”