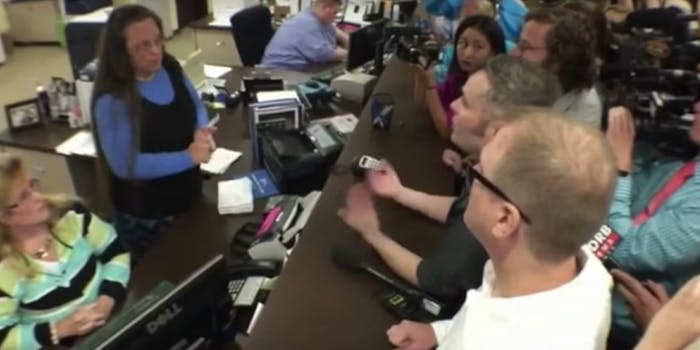 'I am running to restore the people's confidence in our clerk's office.'

One of the men who was denied a marriage license by Kentucky county clerk Kim Davis will run against her in 2018.

David Ermold, an assistant English professor at the University of Pikeville, announced his plan Wednesday to run for Rowan county clerk in the Democratic primary—and then headed to Davis’s office to file his paperwork, WKYT reported.

His partner of 15 years, David Moore, will act as the campaign treasurer.

It's official. I'm in! I am proud to announce my entrance into the race for Rowan County Clerk! I am running to restore…

Posted by David Ermold for County Clerk on Wednesday, December 6, 2017

Davis went to jail for five days in 2015 for refusing to issue marriage licenses to same-sex couples. Davis cited religious opposition, telling Ermold and Moore that she would not be issuing them a license “under God’s authority.”

Davis came out of office briefly to speak to couple (part 1) pic.twitter.com/lzuHysWi0T

A Supreme Court ruling legalized same-sex marriage nationwide in June of that year.

Davis, who was elected county clerk as a Democrat in 2014, announced her plans to run for re-election as a Republican in November.