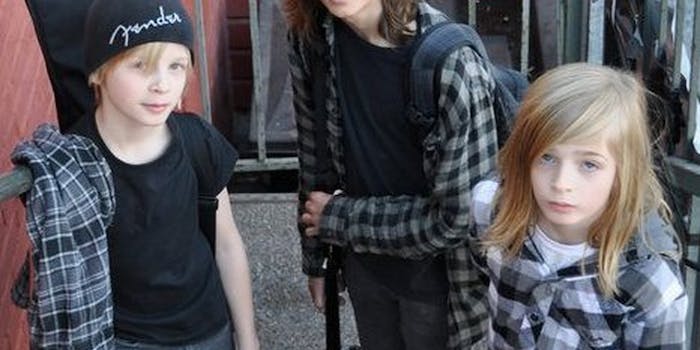 Why won’t Kickstarter let this dad support his sons’ band?

A 44-year-old father's Kickstarter project was denied on account of age requirements.

That’s why father Dan Redman turned to Kickstarter to help fund the debut album for Residual Kid, a young power trio led by his two sons on guitar and drums. The band, comprised of kids aged 12-14, needed to raise $4,000 to record with Frenchie Smith, a Grammy-nominated producer and guitarist for Sixteen Deluxe.

But Kickstarter pulled the plug on the campaign, denying the family from using its crowdfunding platform—despite the fact that the band catered to every single one of the site’s project guidelines.

“There was nothing in regards to age other than the fact that the person filling out the information had to be over 18,” Redman said.

“We put together a pretty detailed campaign with personal videos and everything. It took quite a few hours, and we did our research.”

Redman, 44, took point on the project in an effort to circumnavigate Kickstarter’s 18-or-older age requirements. The project was registered under his name, and he would handle the inflow of pledges and outflow of rewards. He would be the one held accountable with Kickstarter should any accountability issues arise.

Redman knew the site’s eligibility requirements—aside from the age restrictions, Kickstarter mandates that project creators be a permanent resident of the United States with a Social Security Number, a U.S. bank account, and a U.S. credit or debit card—and told the Daily Dot that he’d read over the site’s project guidelines and stipulations with “as fine toothed of a comb” as he possibly could.

But it wasn’t enough. Shortly after submitting the project, Redman received an email from Kickstarter saying that Residual Kid’s campaign would not be approved:

“Thank you for taking the time to submit your project. As you may know, Kickstarter runs on Amazon Payments, and to be eligible for an Amazon Payments account the following is required:
• Customer must be a U.S. resident and at least 18 years of age with a valid tax-payer ID information (i.e., a social security number).
• Customer must also have a verified U.S. bank account and credit card.
A project creator must meet the eligibility requirements as specified on our site. The creator is the person who submits the project proposal, sets up the project, runs the project, sets up the Amazon Payments account, and receives the raised funds through Amazon.
Because you are under 18, unfortunately, you are not eligible to have a project on Kickstarter. We wish you the best of luck as you continue to pursue your endeavor. Feel free to submit another project once you’re old enough.”

Redman submitted a brief appeal—Kickstarter appeals are limited to 500 characters—saying that he was 44 years old and in charge of the account and associated campaign. He and the other parents involved worked with a lawyer to establish Residual Kid as an LLC, and the band had an operable bank account. He’d taken all the proper precautions to ensure that every component of the Residual Kid campaign checked out with the stipulations onsite.

Redman took another look at the site’s project guidelines. He thought that there might be a clause that stipulated that anyone associated with the project had to be over the age of 13. (Redman’s youngest son just turned 12.) But he couldn’t find anything. Kickstarter’s only provided age requirement was that the project creator had to be an adult. (By contrast, a recent campaign by the critically acclaimed Tune-Yards to support the youth initiatives of the San Francisco Rock Project passed without notice.)

Redman received a response a few days later: His appeal was denied. The email came from a no-reply address and contained no personal information or phone number to call. All the email said was that the project did not meet Kickstarter’s Project Guidelines and that it it could no longer be submitted to the site.

“That was the extent of it,” he said. “Dead in the water with no avenue to pursue.”

Not entirely. Redman and Residual Kid are now looking into Pledge Music and IndieGogo, two similarly structured crowdfunding sites with lower profiles and a more firmly dedicated focus on music.

“This is a $4,000 project that we’re looking to fund,” Redman said. “Production, recording, and pressing, and we’ve already got the first date booked. We don’t want to cancel right now.”

Kickstarter has not returned the Daily Dot’s request for comment on the issue.

The site has been mute on many issues pertaining to the acceptance and denial of certain projects. But in past cases, project proposals have come with a certain grey area—some have bordered on “Fund Your Life” campaigns” while others, such as John McGinnis’s Synergy Aircraft project, were initially denied approval because they were deemed too ambitious.

Residual Kid’s case is more cut and dry: A 44-year-old man with a business and bank account was denied the chance to raise money so that his kids could record an album.

Something here is clearly out of tune.