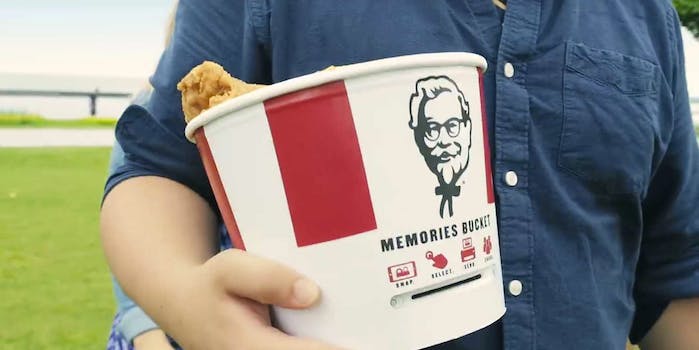 We created this monster, and now we have to deal with it.

The human experience is a shared one, which means we are all to blame for the existence of the chicken bucket printer from KFC.

The KFC Memories Bucket, available in a limited quantity because distributing them more widely would collapse the fragile chicken-based technology market, will be available in Canada to celebrate KFC’s 60th year of operation in the country.

Sadly, it will never reach its 61st year, because the very existence of this bucket marks the coming apocalypse that will end humanity.

It’s unclear where we as a society lost our way, but the route that we have taken has led us here—to a wasteland devoid of hope, where the Canadian branch of a company that sells heavily breaded mostly chicken meat can install Bluetooth printers in grease buckets.

The Memories Bucket can print out images captured via smartphone, much like Polaroid photography from a simpler time when chicken buckets were only chicken buckets and nothing more.

KFC wants people to print out photos of good times, but there are no good times left to be had; they all left the very moment the Memories Bucket was conceived.

There is still time to change course, to save humanity and rescue us from the brink of extinction. If you are selected to receive the Memories Bucket, gently remove the chicken from container, place the cardboard bucket on the ground, and stomp it relentlessly until it cannot function. Then douse it in a cleansing flame.

Whatever you do, do not allow it to serve its sinister purpose—to document the fall of civilization, one chicken-fat-laced photo at a time.

H/T The Verge | Screengrab via KFCCanada/Facebook