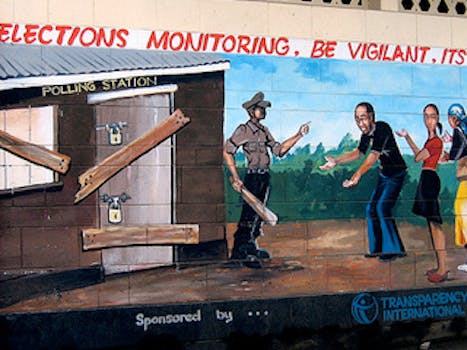 How technology is shaping the decisive Kenyan elections

Kenyans are reexamining the power of political choice and the country is acting as a laboratory for how technology can help ease and balance transitions of power in demanding times.

The last Kenyan presidential elections were characterized by unexpected and cataclysmic violence. Some 1,200 people lost their lives and more than 600,000 were displaced from their homes, after Mwai Kibaki won over Raila Odinga by an exceedingly narrow margin in an election widely believed to be compromised by irregularities.

But the greatest violence was to the Kenyan sense of self. Other countries in Africa had killed over elections, over tribal affiliations, but not Kenyans, at least not to the degree seen in other parts of the region. Now that innocence is gone, replaced by a grim determination to arrest this slide into chaos. Technology took a primary role in stemming that bloody tide.

As the next presidential elections loom, Kenyans are reexamining the power of political choice, and the country is acting as a laboratory for how technology can help ease and balance transitions of power in demanding times.

The primary technological product of the 2007-2008 elections was Ushahidi, an open source crisis-tracking tool whose name in Swahili means “testimony.” Created by Erik Hersman, Ory Okolloh (Google’s policy manager for Africa) and a few others, it was used to track election violence during that election. Since then, it has become a major backbone to crisis tracking from Haiti to Syria. 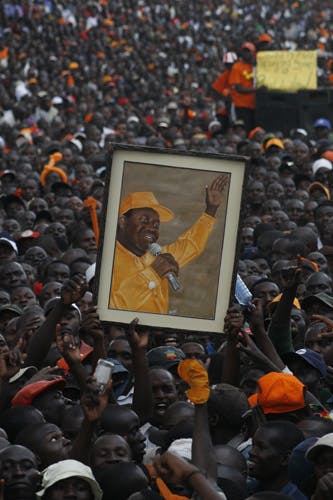 Supporters rally for Raila Odinga in the last presidential election.

During the constitutional referendum of 2010, in which the country voted in an updated constitution, a point of considerable pride among Kenyans, the amount of violence and election fraud was negligible. Part of the reason for that might be the fact that monitoring technology and platforms were not just available but had become a part of Kenyans’ toolkit for voting.

Samuel Ochanji, a tech specialist in the nonprofit sector, said at the time, “I had both the TV and my laptop on and I could easily compare results across broad platforms and channels and they were consistent!

“It’s a revolution from our past shambles where votes were cast in the day and counted (read: manipulated) in the night. The electoral system has been completely decentralized (which) minimizes chance for fraud and increases Kenyans’ trust in the electoral process!

“I think we have just built ourselves the most advanced electoral system in Africa and of course put in place the most progressive constitution ever enacted on the African continent.”

But now the next presidential elections have rolled around again, set to take place on March 4. Several of the candidates have been indicted by the International Criminal Court on charges of crimes against humanity related to the events surrounding the previous presidential election.

Unlike the constitutional elections, tribal and party lines are stronger in the presidential election, and the potential for violence is greater. If your guy’s at the top, you have a lot better chance of getting your hands on the levers of power and seeing some of the lucre passed down for your loyalty.

This is no different anywhere, but the tribal layer and the history of violence has left many fearful of what could happen, especially given the ethnic and religious violence that has marked the country in the last year.

“We’re ramping up for quite a big use of tech for the election,” Angela Crandall (pictured right) told the Daily Dot. Crandall is a Hawai’ian who has lived in worked in Kenya for three years and serves as research project manager for the iHub in Nairobi; the director of the Waza Experience art teaching organization; and, most importantly in this context, director of the Umati project. 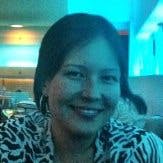 Hers is just one of many projects up and running in advance of the election.

Google has announced a series of election-specific tools and projects. They include the Kenya Elections Hub; a partnership with the Independent Electoral and Boundaries Commission (IEBC) “to provide open source technology powering their online voter tools, including registration confirmation online and over SMS, mapping the polling stations, and a developer API.” They have also partnered with Ghetto Radio to host a number of candidate hangouts on Google+.

Code4Kenya developed the open-data GotToVote site to help Kenyans locate their nearest voter registration center, and Nairobi’s broadsheet, the Daily Nation, has launched a dedicated election site with a “sentiment tracker” focused on the candidates, which even lists their number of Twitter followers and Facebook friends.

One reason the projects and tools have proliferated so substantially is the sheer penetration of wired minds. There were 8 million mobile users in 2007; there are now more than 30 million.

The Umati project that Crandall helps to run is a “dangerous speech” monitoring project built on Ushahidi’s Swift River platform. Five specialists, representing Kenya’s five major ethnic groups, focus on social media and the Web for a country of just under 42 million. They have set definitions to identify the point at which free speech becomes criminal incitement. When such instances occur, they forward them to Uchaguzi, the incident-mapping platform for the election. There citizens can track, promote examination of, and even debunk the speech.

Violence has claimed the lives of dozens of people in the Southeast Tana River district, with Orma herders and Pokomo farmers attacking one another. The Somalia-based El Shabaab terrorist group has set off bombs in the capital of Nairobi, inspiring hate speech in social media against Kenya’s Muslim citizens. Ferdinand Waititu, parliamentarian and The National Alliance (TNA) party candidate for Nairobi governor, was filmed fulminating against the Masaai community.

All this has inspired the Kenyan government to implement an observation regime against certain types of hate speech, warn its perpetrators they will be watched and cited, and even hire about 100 monitors to watch social media sites like Facebook and Twitter for such alleged incitements to violence.

The government can follow the map to block or close down a site that communicates the speech, such as a Facebook page, and even use it to identify a user to arrest under the 2009 Communications Amendment Act, a piece of legislation about which many Kenyans have some severe reservations.

The project is also issuing monthly reports (PDF) of its findings. 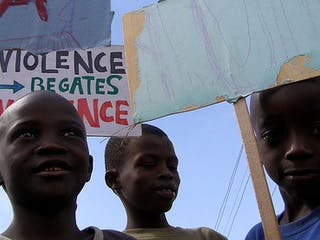 Those who are familiar at all with the experience of Kenyans during the last election, and the violence-fraught struggles of Africans continent-wide to secure more lasting and stable democracies, are forced to at least consider that point at which speech becomes action, and action becomes actionable.

Social media has lead to the identification of MP Ferdinand Waititu as an alleged inciter of ethnic violence through a popular video clip taken by a rally witness on his mobile phone. And yet, he remains the candidate for the governorship of Nairobi. This introduces the question: Is there any tangible point to monitoring hate speech if the government has limited will to do anything tangible with the information? 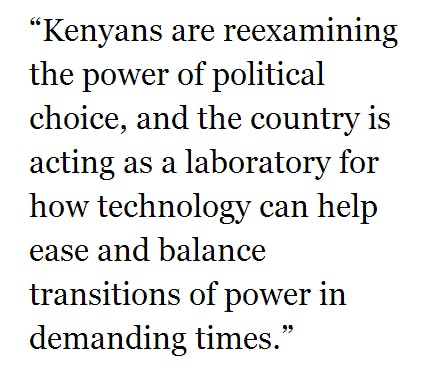 “Unfortunately, even within the government, you’ll find these politicians who believe they are above the law,” admitted Crandall. “However, Kenya is, at least on paper, party to a lot of international agreements on elections and has this new constitution. The potential for high level of rule of law is here.”

Kenya’s integration into the international community, including its cutting edge position as an African tech innovator, does seem to give it more to lose. The fact that one of the front-runners for the presidential race, Uhuru Kenyatta, and his running mate William Ruto, both of the TNA party, have been indicted by the International Criminal Court in The Hague has Kenyans concerned, to the point where they are discussing out loud what sort of indictments their country might face should Kenyatta become president. British and American officials have already made statements warning of “consequences” should he take office.

Even if this information in some cases winds up with minimal action now, said Crandall, “if we collect and aggregate this information, the people will have it. This is especially important to the growing middle class, educated Kenyans, who believe they should be able to hold their leaders accountable.”

For many people, especially in the West, monitoring speech and taking legal measures against it smacks of censorship and tyranny. The challenge for Umati is to reconcile that with the need for “free, fair, and transparent” elections.

According to Crandall, Umati is crafting a five-part process of defining “dangerous speech, and of differentiating it from hate speech, based on Prof. Susan Benesch’s work. Dangerous speech is defined as a subset of hate speech which has the potential to catalyze violence. Hate speech can be vile and ugly, but may not be ‘dangerous speech.’”

What Umati is doing, “lends itself to protecting freedom of speech because our project aims to limit dangerous speech while avoiding excessive restrictions.”

There’s a civic education element to the project as well.

“Together, we can disprove myths that are being retweeted or otherwise pushed around online,” Crandall said.

After a Muslim cleric was killed in Mombasa, some Kenyans posted untruths on Twitter, inflaming people. One of the memes that became very popular was the claim that Muslims had set one of Mombasa’s Christian churches on fire. The director of the Whitesands Hotel in Mombasa went out to church that was supposedly burning and photographed it. The church was fine. He posted the photo, saying, “Stop the lies!”

Whatever else the 2013 Kenyan presidential elections might be, under-reported won’t be one of them. If any evil is done, it will be committed under all the scrutiny a mobile-equipped and tool-rich society can direct at it. If, like the 2010 elections that voted in the new constitution, this one is successful and free of significant violence, it will no doubt be trumpeted to the world by the country’s proud voters—using those same instruments, over which they are fast becoming masters.

Update: Jan Van den Broeck, a professor at the Institute for Anthropological Research in Africa, sent the following clarification to the history of Kenyan political violence.

“Violence became institutionalized with the introduction of multi-party politics in 1991. Ever since, violence has occurred throughout the country during every election period. The difference being that back than violence took place mostly before the elections rather than in the wake of it.

“Besides this, ethnic conflict related to politics, resources and the like have taken place and still take place on a regular basis. The recent outburst of violence in Tana River (which has caused about a 100 lives) is just one example. Ethnic violence (whatever the undercurrent or motivation might be) is endemic to large parts of the country (North-Rift, Turkana, Samburu, Isiolo etc.).”