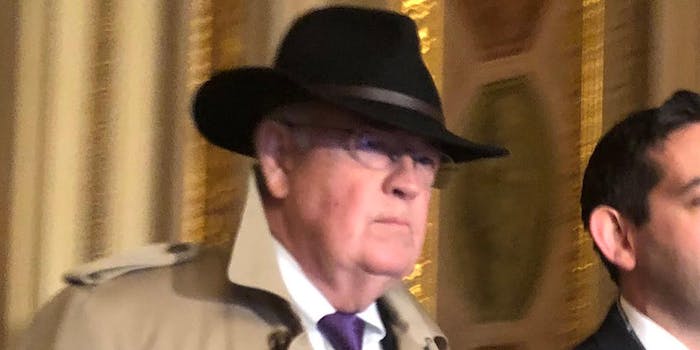 'Up until now Ken Starr's black hat has always been metaphorical.'

Ken Starr has just proven that even amidst the formality of a Senate impeachment trial, with determination, you can express your true self. And what better way than with a hat, the ultimate extension of one’s personality?

Today, the man serving alongside Alan Dershowitz as President Donald Trump’s impeachment co-counsel dug deep in his closet for the perfect accessory to reflect his Ken Starr essence.

He selected a black cowboy hat. This he wore on his head on purpose on his way to defend the president of the United States.

Does that hat look ridiculous? Perhaps.

Does it seem incongruous with the seriousness of an impeachment trial? Yes, verily.

Should he have paired it with something other than the tan trench coat wardrobe staple of TV detectives and flashers, such as a fringe jacket? Certainly.

But this hat could also be Starr’s clever way of communicating his belief that the impeachment is ridiculous, and that he’s utterly unworried about the outcome, even feeling a bit whimsical.

No matter what Ken Starr’s hopefully sound reasons for wearing the hat favored by Western movie villains may have been, all across Twitter sounds of laughter rang out.

“Get this guy a cape and he could be Frank Costanza’s lawyer,” said @SkeletonMarv.

“I hope he found Carmen Sandiego, at least,” @nuclearcarly chimed in.

1940's narrator: "Ken Starr came in on the night train to the big adios. The tension in the Capitol was palpable. He could taste it. It's not often that you get a second chance. For Ken, this was it. In this game, there's the case that makes you and the case that breaks you." https://t.co/ja1l8x6QUC

Poor Ken Starr. With the hat he looks like an Indiana Jones villain, but without it he looks like the evil South African minister in Lethal Weapon 2 who dies screaming "DIPLOMATIC IMMUNITY!" pic.twitter.com/lf5uRWfhxw

It appears that Ken Starr is wearing an Australian Akubra hat. Exactly like one I own. Which I shall now burn. https://t.co/rh14M86sPI

I thought Alan Dershowitz would be driving the clown car today but Ken Starr put on a Fez hat and stole the show. pic.twitter.com/OISBQmPMNJ

What the heck is with that hat? He thinks he's a spy? Or is he trying to out-hat Carter Page? pic.twitter.com/EApVufp1hS

Jeez! Up until now Ken Starr's black hat has always been metaphorical. https://t.co/Kil7k7sKAG

Only Ken Starr could carry off the Cowboy hat/London Fog look.

Ken Starr had another, less ridiculous hat picked out, but then Billy Porter went and wore the same one to the Grammys. pic.twitter.com/GXxYnDGQ9Z

Although many seemed surprised by Starr’s show-stopping head-topper, this isn’t his first time. In 2012, before Baylor University fired him for allegedly mishandling rape cases, the Waco Tribune-Herald gave him a “rodeo makeover.” (Yes, there are photos. No, you will never unsee them.)