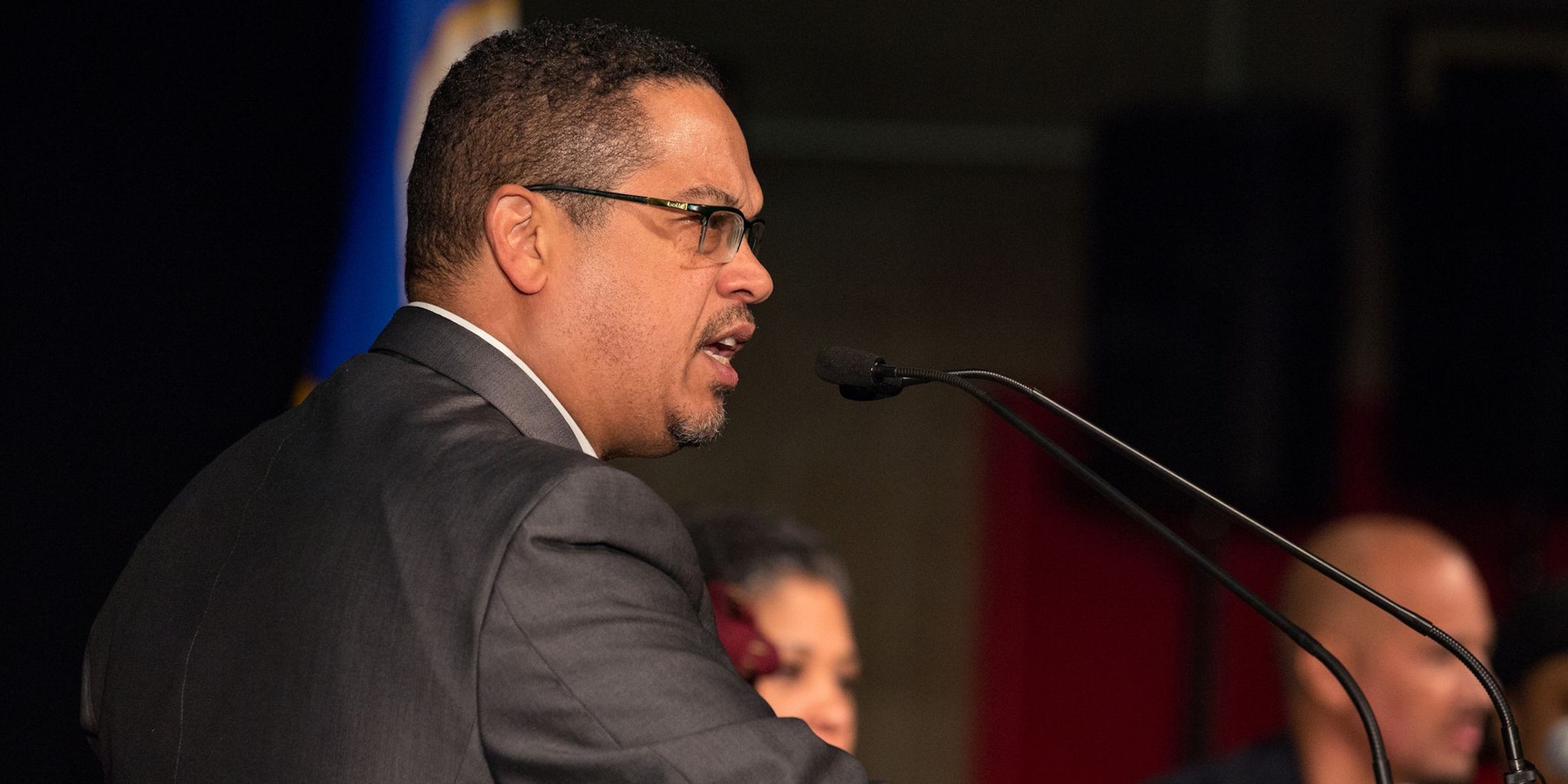 This progressive U.S. congressman is a podcast star in the making

The most striking thing about Rep. Keith Ellison’s podcast is how little he talks.

Members of Congress are a notoriously loquacious bunch. You’d talk a lot, too, if keeping your job depended on ensuring everyone in your district knew you were working as hard as possible to advance their interests. On a platform like podcasting, which could easily turn into an opportunity for grandstanding so excessive it borders on solipsism, there’s something supremely satisfying about listening to Ellison sit back and let someone else do the talking.

To be sure, Ellison’s voice is all over We The Podcast, a series the five-term Democratic congressman from Minneapolis has been producing and hosting for about a year. He introduces segments, frames each episode’s argument, and interrogates his interview subjects, who range from an ex-con trying to turn his life around by working at a recycling center to an award-winning Harvard political scientist studying demographic patterns in voter turnout.

Ellison started the podcast after his frustration with scant attention the mainstream media paid to the issues affecting poor people reached a breaking point.

“We’re always trying to figure out how to refocus the public’s attention on issues that concern working people.”

“We’re always trying to figure out how to refocus the public’s attention on issues that concern working people. If you look at the ordinary corporate press, what you see is some stuff on the Dow Jones Industrial Average and maybe a few stats on unemployment. But there’s really not that much news on the economic realities of working people,” he told the Daily Dot in a phone interview. “When was the last time you saw a story about payday lending? Or home health-care workers who take care of our … aged loved ones and who don’t make enough money to live on? They qualify for food stamps as they’re making sure our mothers and grandmothers have what they need.”

Podcasting wasn’t Ellison’s first choice. He tried writing op-eds for newspapers. He published one in the New York Times in 2015 arguing that the government needs to take action to facilitate the flow of cash remittances from the United States to Somalia, as the shifts in the banking industry have closed off avenues for Somali Americans to send money to their friends and family members. He penned another in the Washington Post the year prior urging the Israeli government to end its blockade of Gaza. The impact of those articles was, he said, limited.

Ellison noticed that, over the last few years, the frequency with which he popped in his headphones to listen to music while driving in the car or sitting on an airplane had decreased—replaced by podcasts like This American Life, Serial, and The Young Turks. He figured he’d give podcasting a shot.

When Ellison decided to turn his congressional office into a podcasting studio, none of his staffers—who he recruited to help produce the show—had audio editing experience. “It was a lot of on-the-job training over here,” he said with a laugh

That isn’t to say Ellison was entirely flying blind. Prior to running for elected office, Ellison was the unpaid host of a public-affairs talk show on the Minneapolis R&B station KMOJ for eight years. Nor is he the first sitting elected official to host a show in the media. California Lt. Gov. Gavin Newsom, who became a national figure after temporarily legalizing same-sex marriage while mayor of San Francisco, hosted a show on Al Gore‘s Current TV until the network was sold to Al Jazeera. Ellison’s House colleague, Rep. John Sarbanes (D-Md.), did his own podcast for 17 episodes starting in 2013, but he abandoned the effort in 2015.

Within lefty political circles, Ellison is something of a rising star. The first African-American sent by Minnesota to the House of Representatives and the first Muslim ever elected to Congress, the Detroit native is co-chair of the Congressional Progressive Caucasus. At 71 members, the Progressive Caucus is the largest congressional caucus within the Democratic Party and one of the loudest organized inside-the-Beltway voices pushing the party to the left. A fixture on left-leaning news outlets like MSNBC, Ellison was one of the first members of Congress to endorse the 2016 presidential bid of Vermont Sen. Bernie Sanders.

Ellison is an old-school liberal whose core messages largely revolve around advocating for governmental solutions to the issues facing the poor and middle class. He’s sponsored bills to protect tenets against foreclosure, allow for same-day voter registration, and eliminate government subsidies to fossil-fuel producers.

That advocacy is what drives We The Podcast. Each episode of Ellison’s show follows a general format: The congressman introduces the show’s narrowly focused topic with a short monologue, and then the rest of the program, which can last from about six minutes to the better part of an hour, consists of clips from interviews Ellison—who does everything on the shows from writing the scripts to choosing the music—conducted with his guests.

The first episode was about how companies can retaliate against employees involved in union organization.

Others dug into “Right To Work” laws, the gap in voting rates between the rich and poor, and how the sky-high rates charged by phone companies (sometimes up to $14 a minute) to prisoners calling their families are deeply exploitative. Another gathered a quartet of religious leaders—a catholic nun who founded a social justice nonprofit, a protestant minister who used to teach divinity at Yale, a rabbi with a synagogue in Ellison’s district, and the imam the congressman personally consults for spiritual guidance—for a discussion about economy featuring scriptural arguments in favor of raising the minimum wage.

However, what is likely the most interesting show is a 32-minute deep dive into the inequities built into the franchising system.

In the episode, Ellison interviews Leslie and Jim, a couple who ran a Subway franchise in Northern California. When their eldest daughter, Chelsea, was diagnosed with cancer, they needed to sell the store to raise funds. Even though they had multiple offers, which came in around $500,000, the pair charged that the Subway development manger, whose approval was required for the sale to go through, rejected them all because he wanted to buy the franchise himself for a reduced price. As a result, the couple was forced to sell their family home shortly before Chelsea passed away.

“The franchise system, and the way it is constructed, is horrible and needs to be change,” Jim told Ellison, who just so happened to have a pair of bills aimed at reforming the franchise system, which he introduced around the same time the podcast aired.

Ellison notes that every single podcast is related to some form of advocacy work he’s doing. “It becomes another tool to help people understand why I’m pushing a piece of legislation. It’s another tool to understand what the whole story is,” he said. “We want to get people to understand the issues, and then at the end we might say, ‘Oh we got a bill.’ We want people to get why we’re doing this so that by the time they get done listening to it, they’re saying that somebody ought to propose a bill. And them I’m like, ‘Funny you asked.’”

Even so, references to Ellison’s job are infrequent enough on the podcast that, listening through multiple episodes at a time, it’s a little jarring when he mentions, in passing, that voting for the Lilly Ledbetter Fair Pay Act was one of the proudest moments of his congressional tenure.

The podcast’s audience is small, but it’s growing. We The Podcast‘s 15 episodes have attracted about 9,000 total listens.

Ellison’s policy goals are served by the congressman telling the story he wants to tell. He conceptualizes what he does as the equivalent of long-form audio op-eds where people who are “more eloquent” or “more persuasive” make Ellison’s case better than he could in his own words. In the course of a single day, Ellison says he could go from talking to someone living in a homeless shelter in the morning to chatting up the Masters of the Universe at the ritzy Minneapolis Club in the afternoon. That diverse network of connections give Ellison the ability to easily find someone to say exactly what he needs said.

“They are tools of democracy. They belong to everyone, like libraries and parks and the ability to reason.”

Ellison insists what he’s doing isn’t journalism, because he doesn’t make an attempt to hide or counteract his biases. “I’m not trying to take both sides of the story. I’m not trying to get the billionaires saying they should get more subsides and then the poor folks saying they need a little but of help too,” he said. “I’m trying to help people what its understand what its like for the working poor. We’re not trying to go for balance, which a journalist is duty-bound to do. Not in an editorial, but in a story—you’ve got to have the other side.”

NYU journalism professor Jay Rosen argues that, regardless of whether Ellison sees himself as practicing journalism, the tools he’s using to put the podcast together are ones that are inherently journalistic.

“I refer to things like conducting an interview, making an argument, finding facts and statistics to support your case, asking good questions (and listening to the answers to form better questions), interrogating experts so that what they know can be brought to bear on a public debate, telling stories that illuminate larger problems,” Rosen explained. “I hear Ellison doing all of these things. Professional journalists are supposed to be especially good at them—and they are—but these are skills all of us need to participate in politics as persuasion and public problem-solving.”

“They are tools of democracy,” Rosen continued. “They belong to everyone, like libraries and parks and the ability to reason.”