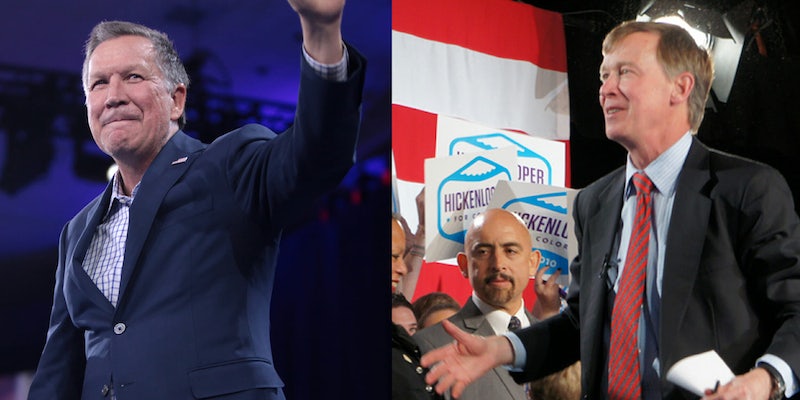 Could this Republican/Democrat team beat Trump in 2020?

It would certainly be a unique ticket.

Axios first reported on Friday that Ohio Gov. John Kasich and Colorado Gov. John Hickenlooper are exploring the possibility of running on an independent ticket in the 2020 presidential election. Kasich, a Republican, would likely be at the top of the ticket, the website reported.

The two governors are working on policies for healthcare, job creation, and immigration, and they are talking with media companies to create a podcast or show that would continue “cementing their brand,” according to Axios.

While this double-party ticket would be an outlier among modern presidential politics, nothing is set in stone. Kasich is reportedly keeping all of his options open—including running against Trump during the Republican primaries, another rarity in today’s political environment.

Some Democrats are “apoplectic” about the idea of Hickenlooper running with Kasich, Axios reports.

“No Dem wants Kasich anywhere near our ticket,” a source told the website. “Sounds like a No Labels fantasy, but moderate Dems would hate it.”

Others seemed at least open to the idea.

“Our political system is completely broken,” another source said. “Something big and historic needs to happen to break the logjam. I’m a big Dem, but I’m for anything that … does away with this hyper-partisanship on both sides that is paralyzing our government.”