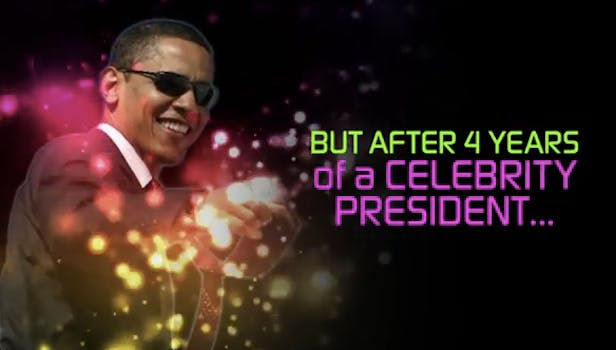 Apparently, Karl Rove's American Crossroads doesn't think the president should be able to lead a slow jam with Jimmy Fallon.

After President Barack Obama slow-jammed the news and his GOP critics on the Late Night with Jimmy Fallon earlier this week, Karl Rove’s political action group has seized the opportunity to portray the president as a celebrity—not an actual leader.

In a new YouTube video called “Cool” and posted on April 26, American Crossroads asks a simple question in the summary section: After four years of a celebrity president, is your life any better? More than 600 of the video’s 180,000 viewers have sounded off in the comments section.

Of course, this isn’t the first time Obama has gotten such treatment.

Four years ago, when Sen. John McCain was running a desperate campaign against the popular Democratic candidate, he too tried to paint Obama has a celebrity in an online ad that featured Paris Hilton and Britney Spears. With more than 2.3 million views, “Celeb” remains one of McCain’s most viewed advertisements, but also one of the most disliked.

Although Rove’s video is far behind in views, the number of YouTube likes is suddenly outnumbering the dislikes. Although it’s still early to tell how the video will be received in the long run, the number of dislikes shows that the president is in a much more damaging position than he was in four years ago, even with the themes of both commercials are almost identical.

But the themes of the commercial didn’t sit well with everyone.

Of course, some said they could relate to the commercial and were ready for a change.

“How is my life doing after four years of a celebrity president? Well, honestly, I don’t﻿ know that (McCain) would have been any better, but then I doubt he could have been worse either,” BubblesBigBro. “I’m ready for a change myself. Looking forward to November to see if we can make that happen.”