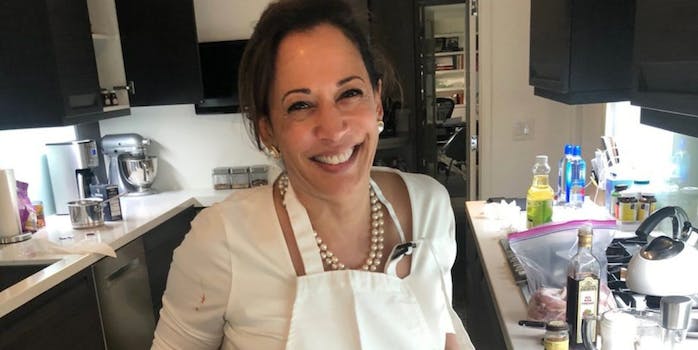 The crease truthers are out there.

Yesterday was Mother’s Day, a time to show love toward your mother specifically, and offer a general appreciation for all mothers worldwide.

Unless that mother is Sen. Kamala Harris (D-Calif.), who is running for president. Yesterday, Harris’ husband posted a tweet of her whipping up a marinade for jerk chicken.

That should be the end of, well, that. Happy Mother’s Day, she’s free to celebrate it in any way she wants.

But somehow this innocuous tweet sparked two different controversies. First: Harris cooking truthers. Because the apron had a crease in it, it couldn’t be real, or regularly used by Harris. It must be a photo op.

Damn, nobody thought to throw that apron in the dryer for 5 minutes before staging this photo?

While it could be an often unused apron, that doesn’t really have anything to do with how much or how often Kamala cooks. As her husband mentioned, she was in between events. It’s possible she doesn’t wear it all that often when she’s home cooking and just put it on then since she was wearing dress clothes.

But the psuedo-controversy grew to such a fervor that Harris’ comms person weighed in.

This is one of the funniest 2020 conspiracy theories yet: Kamala isn’t really a cook because her apron is creased!!#Creaseghazi or #Creasegate – which will it be? https://t.co/ybOkznEIU6

He shared his own photo of an apron to prove that yes, articles of clothing that are folded and stored can have a crease.

oh god guys, how am i going to overcome my inauthenticity: pic.twitter.com/oLPkpDbTSR

That could have been the end of it, but some took issue with the fact that Harris was cooking on Mother’s Day Eve, versus her husband cooking for her.

Jerk Chicken is a great name for a man applauding his Presidential Candidate wife for making her own Mother's Day meal…JFC https://t.co/dHE3Mt4UQ4

The entire drama played out on conservative Twitter aggregator Twitchy, which published not one, not two, but three stories about the jerk chicken marinade tweet.

Luckily, there’s only one more Mother’s Day until the 2020 election.