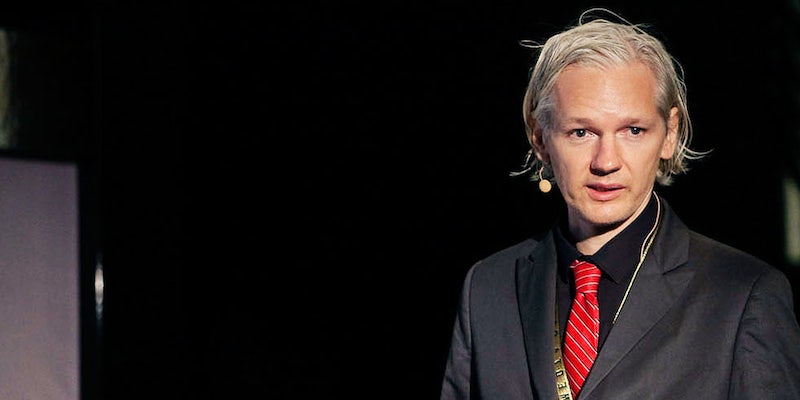 Never-before-seen video shows this harrowing moment as it happened.

You’re in the process of releasing a quarter-million documents of internal correspondence belonging to the U.S. State Department. Suddenly you discover that, because a journalist you’ve been working with has included a password for the unedited versions in a book he’s publishing, the unredacted documents could hit the Web at any moment. What do you do?

Such was the case for WikiLeaks in late 2011, when the leak publisher was on its way to releasing the cache of 251,000 State Department cables it’d received from Chelsea Manning.

Within hours, Harrison’s call was answered via State Department backchannels. Lisa Shields, then-Google Executive Eric Schmidt’s girlfriend and vice president at the Council on Foreign Relations, reached out through one of WikiLeak’s own, Joseph Farrell, to confirm it was indeed WikiLeaks calling to speak with Clinton.

Shields had recently accompanied Schmidt to meet and interview Assange for Schmidt’s 2013 book, The New Digital Age, while the Aussie was spending his days preparing the diplomatic cables for release, living under house arrest at his friend’s estate in Norfolk, England.

In a passage from his new book, republished below with permission, Assange details the phone call, and reflects on the curious player that would eventually reconnect the State Department with WikiLeaks: Google.

Two months later, WikiLeaks’ release of State Department cables was coming to an abrupt end. For three-quarters of a year we had painstakingly managed the publication, pulling in over a hundred global media partners, distributing documents in their regions of influence, and overseeing a worldwide, systematic publication and redaction system, fighting for maximum impact for our sources.

But in an act of gross negligence the Guardian newspaper—our former partner—had published the confidential decryption password to all 251,000 cables in a chapter heading in its book, rushed out hastily in February 2011.(1) By mid-August we discovered that a former German employee—whom I had suspended in 2010—was cultivating business relationships with a variety of organizations and individuals by shopping around the location of the encrypted file, paired with the password’s whereabouts in the book. At the rate the information was spreading, we estimated that within two weeks most intelligence agencies, contractors, and middlemen would have all the cables, but the public would not.

I decided it was necessary to bring forward our publication schedule by four months and contact the State Department to get it on record that we had given them advance warning. The situation would then be harder to spin into another legal or political assault. Unable to raise Louis Susman, then US ambassador to the UK, we tried the front door. WikiLeaks investigations editor Sarah Harrison called the State Department front desk and informed the operator that “Julian Assange” wanted to have a conversation with Hillary Clinton. Predictably, this statement was initially greeted with bureaucratic disbelief. We soon found ourselves in a reenactment of that scene in Dr. Strangelove, where Peter Sellers cold-calls the White House to warn of an impending nuclear war and is immediately put on hold. As in the film, we climbed the hierarchy, speaking to incrementally more superior officials until we reached Clinton’s senior legal advisor. He told us he would call us back. We hung up, and waited.

When the phone rang half an hour later, it was not the State Department on the other end of the line. Instead, it was Joseph Farrell, the WikiLeaks staffer who had set up the meeting with Google. He had just received an email from Lisa Shields seeking to confirm that it was indeed WikiLeaks calling the State Department.

It was at this point that I realized Eric Schmidt might not have been an emissary of Google alone. Whether officially or not, he had been keeping some company that placed him very close to Washington, DC, including a well-documented relationship with President Obama. Not only had Hillary Clinton’s people known that Eric Schmidt’s partner had visited me, but they had also elected to use her as a back channel. While WikiLeaks had been deeply involved in publishing the inner archive of the US State Department, the US State Department had, in effect, snuck into the WikiLeaks command center and hit me up for a free lunch. Two years later, in the wake of his early 2013 visits to China, North Korea, and Burma, it would come to be appreciated that the chairman of Google might be conducting, in one way or another, “back-channel diplomacy” for Washington. But at the time it was a novel thought.