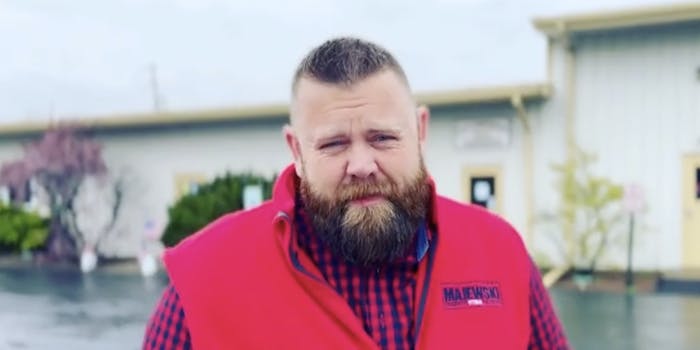 He faces an uphill battle for a seat in Congress, however.

A candidate who espoused QAnon-adjcent beliefs won his primary for a Republican House seat in Ohio, while another suffered a resounding defeat in his longshot bid for a Senate nod

In Ohio’s 9th District, J.R. Majewski defeated three other candidates. He will face an uphill battle against incumbent Rep. Marcy Kaptur (D-Ohio), who has held onto her seat since 1983.

Majewski is an unabashed supporter of former President Donald Trump and even once painted his lawn to support the former president’s 2020 reelection bid.

According to Media Matters, Majewski has used QAnon slogans on his Instagram account before, including the phrase “Where We Go 1 We Go All,” which is popular among believers of the conspiracy, who theorize that Trump is waging a secret war against a cabal of Democratic pedophiles.

Majewski, though, said in an interview he did not support the conspiracy. “I’ve never read any QAnon drop—what they call the ‘Q drop,’ what they post on the website,” he told the Toledo Blade.

But he was seen in an interview on Fox News about his lawn wearing a shirt with a “Q” on it. And according to social media posts, Majewski also helped bring people to Washington, D.C. on Jan. 6, 2021, where Trump supporters eventually stormed the U.S. Capitol to protest President Joe Biden’s election victory.

Majewski admitted to being in D.C. that day but said he was never on the Capitol grounds.

Another candidate in the race for Senate, Mark Pukita, was more outspoken in his support of QAnon, criticizing the media for bashing and attempting to discredit the conspiracy.

Pukita always faced a longer shot to the Republican nod for Senate in a race filed with much bigger names. In the end, he won a little over 20,000 votes.

The Ohio Senate Republican primary was won by J.D. Vance, who will go on to face Rep. Tim Ryan (D-Ohio).