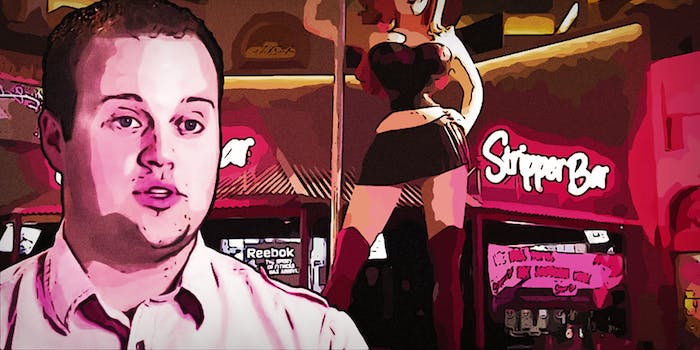 Screengrab via TLC/YouTube | Photo by Wendy Berry (CC BY 2.0) | Remix by Dell Cameron

Josh Duggar apologizes, says he was a ‘hypocrite’ for using Ashley Madison

Josh Duggar says he is the “biggest hypocrite ever.”

“…in my heart I had allowed Satan to build a fortress that no one knew about.”

Duggar was outed by Gawker on Wednesday as one of the millions of Ashley Madison users exposed by hackers in this week’s data dump. Duggar reportedly paid for membership on the cheating-themed dating website with his own credit card, the billing address of which was a match his grandmother’s Fayetteville Arkansas home.

In Touch Weekly magazine revealed in May that Duggar, the eldest kid on TLC’s reality program 19 Kids and Counting, had molested five girls when he was a teenager, four of which were his siblings. Family Research Council subsequently fired Duggar and TLC cancelled 19 Kids.

Here’s the full statement from Duggar:

I have been the biggest hypocrite ever. While espousing faith and family values, I have secretly over the last several years been viewing pornography on the internet and this became a secret addiction and I became unfaithful to my wife.

I am so ashamed of the double life that I have been living and am grieved for the hurt, pain and disgrace my sin has caused my wife and family, and most of all Jesus and all those who profess faith in Him.

I brought hurt and a reproach to my family, close friends and the fans of our show with my actions that happened when I was 14-15 years old, and now I have re-broken their trust.

The last few years, while publicly stating I was fighting against immorality in our country, I was hiding my own personal failings.

As I am learning the hard way, we have the freedom to choose to our actions, but we do not get to choose our consequences. I deeply regret all hurt I have caused so many by being such a bad example.

I humbly ask for your forgiveness. Please pray for my precious wife Anna and our family during this time.

“I have secretly over the years been viewing pornography on the internet and this became a secret addition and I became unfaithful to my wife.”

Another line reportedly cut from the apology read: “…in my heart I had allowed Satan to build a fortress that no one knew about.”

Within hours of the statement, the website Radar Online published a story claiming that Duggar also controlled a Facebook account, registered under the name “Joe Smithson,” which is friends with multiple Arkansas strippers and lingerie models.

“Smithson” was active on the site as recently as January 2014, Radar reports, a year after he began working for Family Research Counsel.

Screengrab via TLC/YouTube | Photo by Wendy Berry (CC BY 2.0) | Remix by Dell Cameron