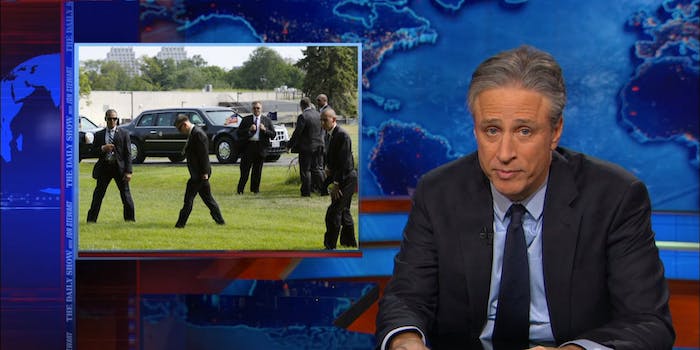 Memo to reporters: Have a little perspective, will you?

One day there will probably be a fictionalized take on the recent Secret Service scandals, but in the meantime, we have Jon Stewart and his meta-criticism of reporters covering the drunk Secret Service agents who hit a barricade.

Stewart isn’t excusing the agents who drove drunk, which is bad no matter how the media covers the incident. But to hear some early reports, it was a full-blown car crash, complete with a dramatic score behind it. As Stewart explains, that didn’t match up to the reality of the incident: a small bump that didn’t cause any damage to the White House, the car, or any people around the agents.

Instead of just holding an intervention for the agents, Stewart now has to hold one for the media, too. He has to teach them to let go of the dramatic coverage of events that don’t need it.

“What are you, fucking drunk?” he asked the media. “I wish you were drunk, it would explain all of this.”