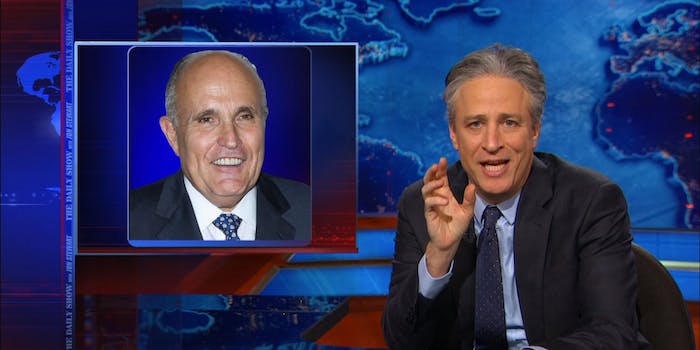 It's a good question.

Giuliani has gotten flak over his comments the past few days from Democrats and Republicans alike (along with almost every news pundit in the country)—a hole that keeps getting deeper the more he tries to defend himself.

If it’s a statement that you have to preface by saying that “you’re about to say something horrible about President Obama” dinner, and even Fox News’ Megyn Kelly askes if you’re going to apologize for questioning President Obama’s patriotism, it’s probably not something you should’ve said.

But Stewart isn’t letting Giuliani off that easy. Calling the perpetual politician out for exploiting 9/11, he took a look back at Giuliani’s plans for New York as mayor and asked him a question back: Rudy Giuliani, do you hate New York?

“You hate New York!” Stewart shouted. “Why? If you love this country, you love all of this country not just the parts that remind you of you—the whole fucking thing.”