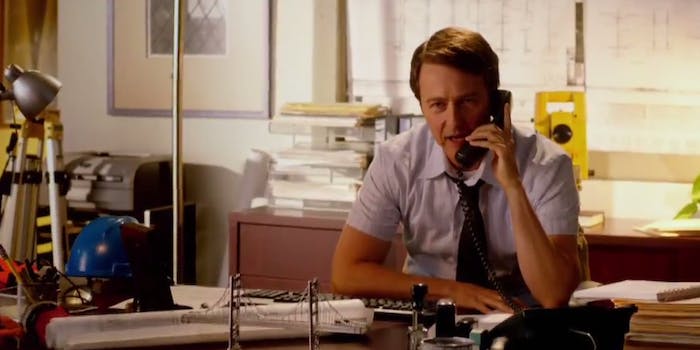 America's infrastructure is a disaster. But does it make for an exciting disaster movie?

John Oliver‘s greatest strength is turning outwardly dull topics (payday loans, net neutrality, judicial elections) into must-watch TV. This week, he tackled the most boring-but-essential topic yet: the U.S.’s aging infrastructure, and why no one can be bothered to maintain all those crumbling bridges and dams.

As several politicians point out at the beginning of the segment, infrastructure isn’t a “sexy” topic. But as it turns out, the lack of interest in infrastructure maintenance isn’t because it’s boring, but because no one wants to pay the taxes required to fix potholes and rebuild old bridges.

Oliver spices up the infrastructure debate with a spoof disaster movie trailer starring Edward Norton. Sure, mending a broken wall isn’t as exciting as defeating Godzilla, but it comes to the same thing if you’ve stopped a building from collapsing on someone’s head.

John Boehner has spent years saying we need to do something about infrastructure, but since he doesn’t want to back a tax increase, his solutions often seem kind of nonspecific. That’s why Last Week Tonight was reduced to reaching out via Twitter and Vine.

We did really tweet at Speaker Boehner. He did not respond. pic.twitter.com/FbHRlFJmHw

Maybe all this attention will do the trick? John Oliver did help save net neutrality, after all.