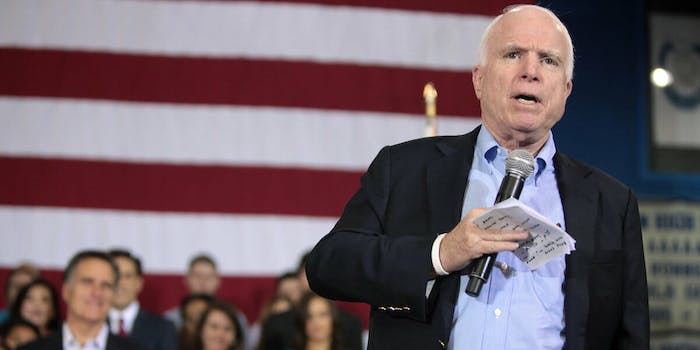 McCain also has some regrets about Sarah Palin.

Sen. John McCain has recently welcomed a slew of high-profile visitors to his Arizona ranch, where he’s battling brain cancer and grappling with the side effects of his aggressive treatment. The 81-year-old Republican and his friends, such as former Vice President Joe Biden, have reflected on McCain’s illustrious life and political career—as McCain himself made several illuminating admissions about his past and future.

Several people close to McCain have informed the White House that they plan to invite Vice President Mike Pence to attend his funeral service held in Washington’s National Cathedral, but not President Donald Trump, the New York Times reports. In 2015, Trump took a public swipe at McCain, who served as a former Navy pilot and spent five-and-a-half years in a North Vietnamese prison.

“He’s not a war hero,” Trump said. “He was a war hero because he was captured. I like people who weren’t captured.”

McCain further expresses his disdain for Trump in a new book, which he is readying alongside a new documentary.

“He seems uninterested in the moral character of world leaders and their regimes,” the senator writes of the president. “The appearance of toughness or a reality show facsimile of toughness seems to matter more than any of our values. Flattery secures his friendship, criticism his enmity.”

In the new book and documentary, McCain also expresses regret over choosing Sarah Palin as his running mate in his 2008 presidential campaign instead of former Sen. Joseph I. Lieberman. McCain’s advisers warned him that selecting Lieberman—a Democrat-turned-independent who supported abortion rights—would tarnish his image among Republicans and hurt his chances of winning the election.

“It was sound advice that I could reason for myself,” McCain writes. “But my gut told me to ignore it and I wish I had.”

Ultimately, though, McCain has spent his time on his ranch in a more positive way. His visitors have expressed their appreciation for his political work and told them how much they love him, and Republican party officials have not yet spoken about who will succeed his Senate seat. Instead, McCain enjoys sitting on his deck and listening to hummingbirds with his wife—a rare moment of tranquility in a life characterized by action and movement.