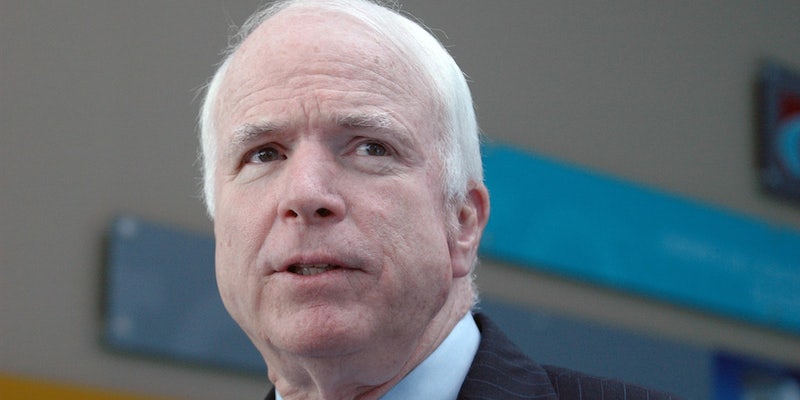 America has no greater authority on this topic thank Sen. John McCain.

While many have praised the release of the Central Intelligence Agency’s long-awaited Torture Report as shedding much-needed light on a dark chapter of U.S. history, the publication has also been condemned by some on the Right who claim that the release is politically motivated, or simply because “America is awesome.”

John McCain is not one of these people.

In an impassioned speech to the Senate on Dec. 9, the veteran Arizona Republican senator denounced the use of “enhanced interrogation techniques” used by the CIA in the years following 9/11 as not only failing “to secure actionable intelligence to prevent further attacks on the U.S. and our allies, but also “[damaging] our security interests, as well as our reputation as a force for good in the world.”

While a prisoner of war in Vietnam, McCain was tortured repeatedly, leaving him with permanent injuries—so when he says that torture victims will “say whatever they think their torturers want them to say if they believe it will stop their suffering,” he speaks from experience.

Over more than 500 pages, the Torture Report details not only how prisoners were sexually violated, subjected to extreme stress and beaten, but also that the torture produced almost no useful information and that 1 in 5 prisoners subjected to the abuse were totally innocent.

McCain’s powerful speech has been lauded by the Atlantic as “arguably the most robust defense so far of the report’s release.” The Daily Show‘s Jon Stewart has also applauded the senator for his remarks.