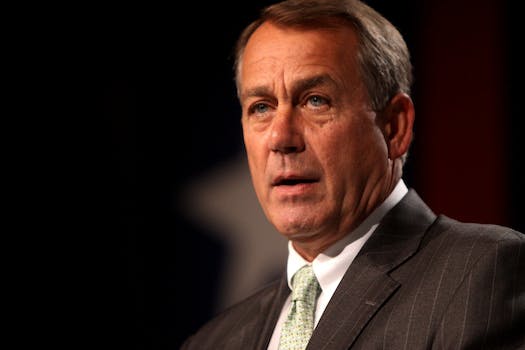 It's the third threat against the House Republican leader's life in less than a year.

John Boehner apparently can’t even get a drink without someone trying to kill him.

Michael Robert Hoyt, 44, is said to have plotted against the Ohio congressman after the former mixologist was fired from his job. Reportedly known by former colleagues a “Bartender Mike,” Hoyt allegedly planned to poison Boehner’s wine at the Wetherington Country Club in West Chester, Ohio, where Boehner is a member. A criminal complaint further alleges that Hoyt told police he planned to shoot Boehner with a Berretta .380 Automatic handgun.

Hoyt allegedly called Deer Park police in a 911 call after he lost his job at the country club. During the call, he allegedly told police about his intentions to harm Boehner.

“Hoyt advised that he had been fired from his job at Wetherington Country Club in West Chest, Ohio, and did not have time to put something in John Boehner’s drink,” the complaint reads. “Hoyt told the officer that he was Jesus Christ and that he was going to kill Boehner because Boehner was mean to him at the country club and because Boehner is responsible for Ebola.”

According to United States Capitol Police Special Agent Christopher M. Desrosiers, Wetherington fired Hoyt after several members complained about him having a negative attitude. Hoyt allegedly believed Boehner was responsible for his termination.

In an email to Boehner’s wife, Debbie, Hoyt mentioned his thoughts of poisoning Boehner’s drink. “If I had any intention of hurting Mr. Boehner, I could have poisoned his wine at Wetherington many, many times,” Hoyt wrote. He further alluded to his loss of employment at the country club.

Deer Park police notified the Federal Bureau of Investigation and Capitol Police about Hoyt’s alleged “current and ongoing credible” threats against the speaker, according to the criminal complaint.

Police have recovered both the .380 handgun as well as an assault rifle, recovered from Hoyt’s mother’s Kentucky home. She said she had removed the weapon herself, though a magazine for the gun was found at Hoyt’s residence. Hoyt later told investigators that he did not plan to harm himself or others.

Hoyt also said believes Boehner is “the devil,” according to the criminal complaint, which is part of the reason he allegedly planned to kill the congressman. He has agreed to undergo a 72-hour psychiatric evaluation. Two years ago, Hoyt was treated for a psychotic episode due to “significant duress,” according to law enforcement agents.

This is the third known threat against Boehner’s life in the past year. In May, an Indiana man allegedly threatened the House Republican leader over congressional failure to extend unemployment insurance. A few days later, an Arizona man was arrested for allegedly threatening to kill Boehner on Twitter.