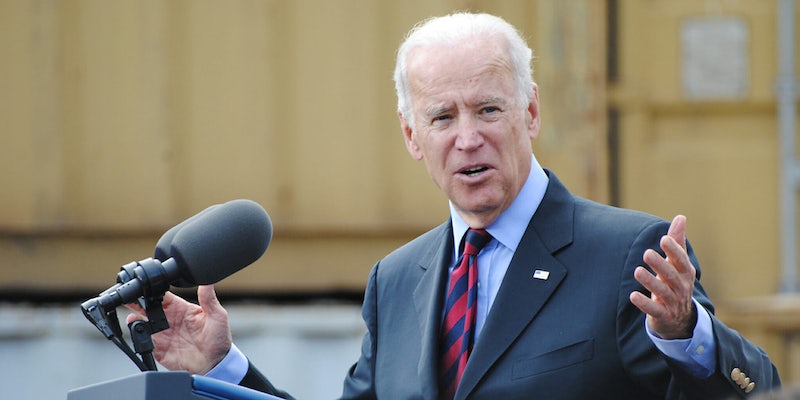 Fellow 2020 Democratic hopefuls are criticizing former Vice President Joe Biden for his remarks about working with segregationist senators in the past.

Biden made the remarks earlier this week, where he spoke of working with former Senators James Eastland and Herman Talmadge, including that Eastland “never called me ‘boy,’ he always called me ‘son’” before talking about how they “got things done” despite not agreeing “on much of anything.”

Sen. Cory Booker (D-N.J.) noted in a statement that Biden’s remarks about Eastland calling him “son” instead of “boy” evoked racist language that was used to “perpetuate white supremacy and strip black Americans of our very humanity.”

“I have to tell Vice President Biden, as someone I respect, that he is wrong for using his relationships with Eastland and Talmadge as examples of how to bring our country together. And frankly, I’m disappointed that he hasn’t issued an immediate apology for the pain his words are dredging up for many Americans. He should.”

A number of 2020 Democrats also criticized the remarks.

“I agree with Cory Booker. This is especially true at a time when the Trump administration is trying to divide us up with its racist appeals,” Sen. Bernie Sanders (I-Vt.) wrote on Twitter.

I agree with Cory Booker. This is especially true at a time when the Trump administration is trying to divide us up with its racist appeals. https://t.co/VyVcG6srQM

When asked about Booker’s call to apologize, Biden demurred.

“Apologize for what?” the former vice president told CNN on Wednesday evening. “Cory should apologize. He knows better. There’s not a racist bone in my body. I’ve been involved in civil rights my whole career. Period. Period. Period.”

He added, according to NPR:

“Here’s the deal: I could not have disagreed with Jim Eastland more. He was a segregationist. I ran for the United States Senate because I disagreed with the views of the segregationists. The point I’m making is, you don’t have to agree. You don’t have to like the people, in terms of their views. But you just simply make the case, and you beat them.”

Symone Sanders, a senior adviser for Biden, also defended him in a Twitter thread on Wednesday afternoon.

“[email protected] did not praise a segregationist. That is a disingenuous take. He basically said sometimes in Congress, one has to work with terrible or down right racist folks to get things done. And then went on to say when you can’t work with them, work around them,” Sanders wrote on Twitter.

.@JoeBiden did not praise a segregationist. That is a disingenuous take. He basically said sometimes in Congress, one has to work with terrible or down right racist folks to get things done. And then went on to say when you can't work with them, work around them.

“The vice president said I should know better, and this is what I know: As a Black man in America, I know the deeply harmful and hurtful usage of the word ‘boy’ and how it was used to dehumanize and degrade. I know that segregationists like the two people he was talking about—through their laws and their language—deeply wounded this nation and the present-day manifestations of their work can still be seen in Black and Brown communities like the one I go home to.”

Vice President Joe Biden told me I should know better. As a Black man in America, here's what I know: pic.twitter.com/MbbrVbi3BJ