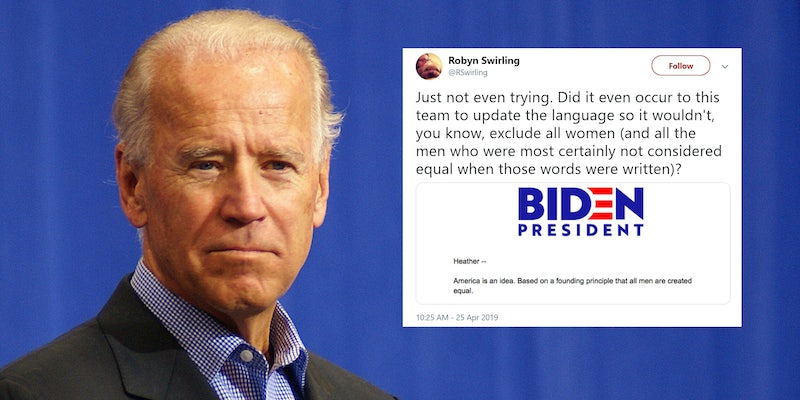 Today, former Vice President Joe Biden announced his candidacy for the 2020 Democratic nominee. In his announcement video, he focused on the ideals of Thomas Jefferson, who wrote the Declaration of Independence.

Biden, tried to contrast Jefferson’s words that “all men are created equal” with images from the neo-Nazi rally in Charlottesville, Virginia—Jefferson’s home—that happened in 2017 and prompted Biden to speak out against President Donald Trump.

There’s only one problem: Jefferson’s edict that all men were created equal came at a time when not all men were considered equal, and when all sexes were certainly not granted equal rights.

When Biden sent that same quote out as part of his blast email announcement—especially given his inappropriate history with women—people noticed.

Wow. I have called Biden the king of the gaffes before. But this? In this moment for Democratic politics? As a certain chief executive might say, SAD. https://t.co/UytK5oja7D

In the #MeToo era, Biden runs for President by telling a woman that "all men are created equal."
Hard to imagine you can be this inept at campaigning. https://t.co/pwB7A4pUtj

Nobody:
Biden: America is an idea. Based on a founding principle that all men are created equal.
Everybody: Unsubscribe
Biden: pic.twitter.com/8eNJJsxHTt

seeing as that was who was included in 'all men are created equal' https://t.co/U5HcTodqW3

People—conservatives, centrists, fans of Biden—will lament that now you can’t even quote the Founding Fathers anymore without upsetting someone.

But Biden certainly could have written “people” instead of “men,” and gotten the same gist of Jefferson’s quote, while also advancing its ideals and making it more applicable to people who weren’t included in the first iteration of it. But he didn’t, either because of some pedantic devotion to history that serves no one except the people represented back then, or because he believes the quote was good as is.

And it’s fair to question why.