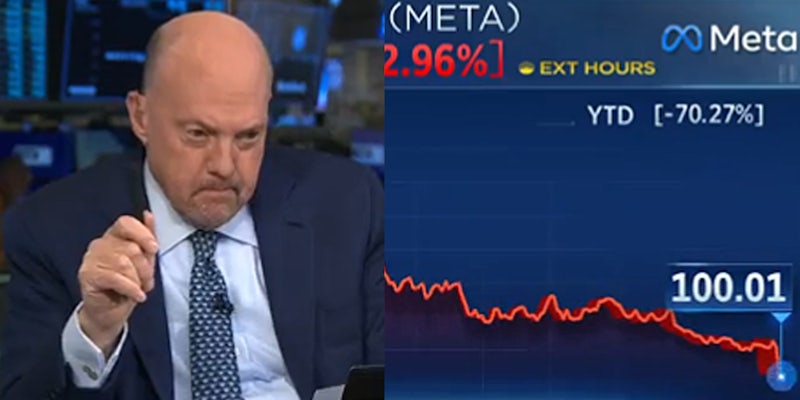 Twitter users are mocking the CNBC host for years of bad stock advice.

Television personality Jim Cramer appeared to tear up on Thursday as stock prices for tech giant Meta continued to plunge.

During an episode of Squawk on the Street, the CNBC host apologized for repeatedly recommending the Facebook parent company’s stock after it fell to its lowest level since 2016.

“I made a mistake here. I was wrong. I trusted this management team. That was ill-advised,” Cramer said. “The hubris here is extraordinary, and I apologize.”

Shares of Meta plunged roughly 24% on Thursday morning after the company announced a third-quarter earnings miss as well as a poor fourth-quarter outlook.

Cramer’s poor financial advice was also highlighted by the Twitter account Inverse Cramer ETF, which tracks the CNBC host’s stock recommendations “so you can do the opposite.”

“Jim Cramer is tearing up over $META,” the account wrote. “Generational bottom in process.”

Cramer has long been mocked online for his choices in stocks. The user behind Inverse Cramer ETF even told the Daily Dot that their own personal portfolio was in the green for rejecting Cramer’s advice.

Despite poor decisions in the past, Inverse Cramer ETF added that they had never seen the television host tear up prior to the Meta debacle.

Other users were quick to mock Cramer and his trading history with a barrage of memes.

“Does bro not realize we always do opposite of what he says?” one user asked. “You good Jim…just keep making your predictions.”

Years-old clips of Cramer giving bad advice to his viewers were also widely shared, including one in which Cramer told one caller in 2008 not to take their money out of Bear Stearns just days before the company’s stock plunged 90%.

Numerous users also noted that they had never seen Cramer apologize before for offering up financially devastating advice.

“JIM CRAMER TEARS UP AND ADMITS HE WAS WRONG ABOUT FACEBOOK $META,” a Twitter user wrote. “THIS IS THE FIRST TIME I HAVE EVER SEEN HIM ADMITTED HIS MISTAKE.”

Meta’s troubles come as company CEO Mark Zuckerberg struggles to convince the public that the metaverse will be the future of the internet. Zuckerberg has also been repeatedly mocked for his cartoonish avatar in Meta’s VR platform Horizon Worlds.