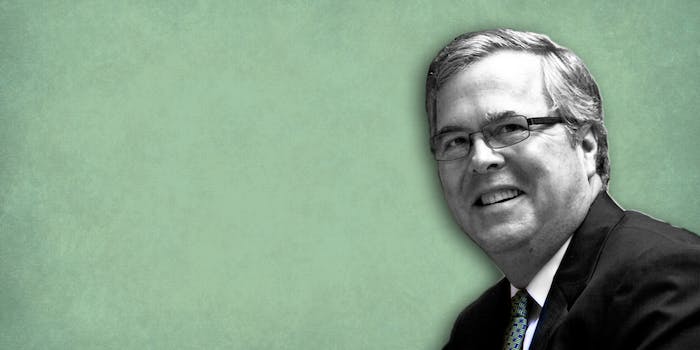 In a charged, instantly memorable confrontation, a young woman visibly confronted Republican presidential hopeful Jeb Bush at an event in Nevada on Wednesday.

“Your brother created ISIS,” she said.

The moment came after a town hall meeting in Reno, Nev., where Bush, who’d just accidentally admitted the poorly kept secret that he was running for president, had blamed the existence of the terrorist group known as the Islamic State on President Obama’s policies of removing most U.S. troops from Afghanistan and Iraq.

But the woman, who identified herself as Ivy Ziedrich, a member of the University of Nevada Young Democrats, didn’t buy that explanation.

Distinguishing himself from other Republican hopefuls, Bush, the former Republican governor of Florida, refused to condemn his then-President brother George’s 2003 decision to invade Iraq, and he recently said that he would also have made that choice. Bush has been resoundingly condemned for such claims, though in fairness, the dominant Democratic candidate, former Secretary of State and New York Sen. Hillary Clinton, hasn’t given a press interview in nearly a month.

A Twitter account that appears to be Ziedrich’s dates back to February. Tweets show her sparring with critics after the event, as well as having a history of local political activism. She even subtweeted Bush: