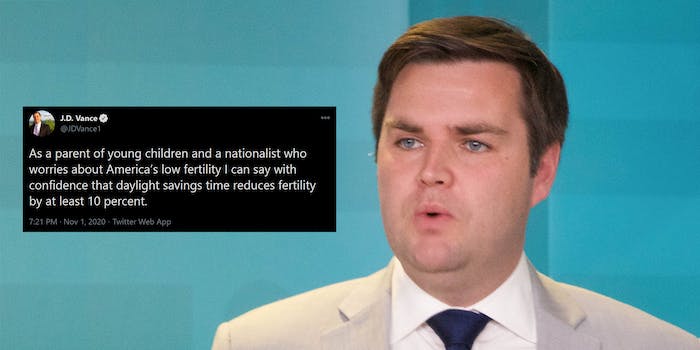 In 2016, J.D. Vance’s memoir Hillbilly Elegy about growing up in the Rust Belt was lifted up as a talisman for understanding the plight of the white working class in America and its support of President Donald Trump.

Despite criticism of his work and his understanding of race, class, and government assistance, Vance became a quasi-celebrity. Elegy shot to the top of the bestseller list in January 2017 as America attempted to decipher just what had happened in the election.

Now, just one day before the 2020 presidential vote, Vance is back with incisive commentary on the state of America.

“As a parent of young children and a nationalist who worries about America’s low fertility I can say with confidence that daylight saving time reduces fertility by at least 10 percent,” Vance wrote on Twitter on Monday.

Vance, who is white, calls himself a nationalist. He’d couch that framing, noting that when he says he’s a nationalist he’s referring to tariffs and steel production and protecting the American worker. But a white man touting nationalism in a tweet about low-fertility rates is making the exact same argument white nationalists and racists use to call for increased birthrates to explicitly keep America white.

America’s low-fertility rate has long been a concern for white nationalists who fret that the double whammy of immigration and black and brown babies with turn America’s whites into a minority.

When backlash came—and it did—Vance reverted back to the only thing he knows: criticism of welfare. He said he just wanted to make sure there are enough workers to keep Social Security solvent (which could be solved with immigration, but he doesn’t suggest that because… he’s a nationalist).

But others on Twitter noted that you can’t claim to know the secret language of the Trump voters—then balk when you get called out on using it.

A movie adaptation of Hillbilly Elegy starring Amy Adams comes out on Netflix this month. It’s a great start to the press tour.