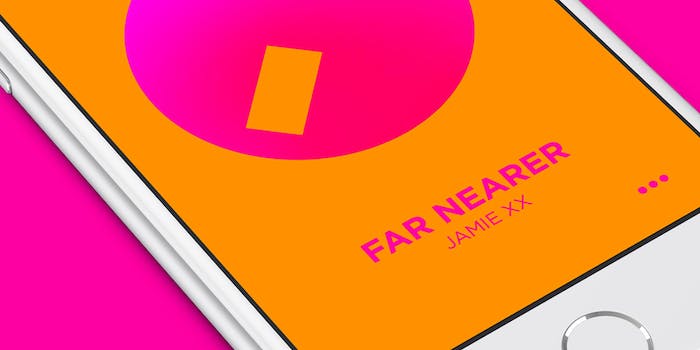 This still doesn't give you license to inflict Nickelback on your friends.

Anyone who has hosted a party, ridden shotgun on a roadtrip, or compiled a diverse iTunes library knows what they’re subjecting themselves to: endless requests of “Hey, can you play this song?” Thanks to a new social music app called Drop—released yesterday by Jawbone, parent company of the ubiquitous Jambox speakers—curating a group playlist is as simple as sending a tweet.

Drop, unveiled at Twitter’s first annual Flight developer conference, operates on the same basic principles as streaming radio app Pandora: at its core, the app pulls from a user’s Spotify Premium or Rdio Unlimited account to deliver a randomized smart playlist. What sets it apart, however, is the ability to let friends get in the action, either via “dropping” a track on a friend’s playlist through their own Drop app or by tweeting directly at the person controlling the playlist.

With each added track, Drop gets smarter about what to parse into the mix. Users who don’t want to leave their musical fates up to chance can continuously add their own chosen tracks, and the app lets the playlist owner reorder tracks that have been dropped in by friends to ensure control over the mix—lest someone try to commandeer the playlist and switch from The Black Keys to Black Sabbath.

At first glance, the app is beautiful, albeit not instantly intuitive. Music begins to auto-play when the app boots up, and it takes a handful of songs to realize that the playlist is dynamic. But the learning curve is minor, and Drop more than makes up for it with an elegant design and an uncluttered interface.

When a friend add a track to the mix, it shows up on the app’s main screen in the form of adorable bouncing bubbles with the user’s avatar. Want to change the order of the mix? Drag and drop a bubble until it bounces where you want it to go. Controlling a mix with a bunch of friends who haven’t downloaded the free app? It’s brilliantly simple to let friends add songs via Twitter: Just send out a tweet from the app, and all friends have to do is reply with the name of the track.

Jawbone’s move into the social space is a savvy second act from a company best known for its portable speakers and its fitness-tracking wearable, the Jawbone Up. The company acquired Playground.fm, a social music sharing app, back in late 2013, and TechCrunch speculated at the time that Jawbone might have been working on its own music streaming service. As Vivek Agrawal, co-founder of Playground and current head of audio software at Jawbone, wrote in a blog post announcing the launch of Drop today:

”We started by looking at opportunities to improve the JAMBOX experience, and found our inspiration from a simple frustration expressed by Jon Witort, one of our engineers. As the JAMBOX owner in his group of friends, he consistently had to play DJ as well…Today we’re excited to announce the fruit of our efforts, DROP by Jawbone. It’s a new music app that elevates the social music experience to a whole new level – it plays music you’ll love with the touch of a button, takes requests from your friends in a seamless way, and constantly adapts to ensure everyone hears music that they’ll enjoy.”

While the randomization may not appeal to people who prefer more control over their group-curated mixtapes, Drop engineers are committed to Playground.fm’s mission of making social music sharing highly intuitive. After heavy song-skipping, the app’s random song offerings become unpredictable, but get into a Drake groove and the dynamic playlist gets smarter. The recommendations engine takes into account various factors aside from length of play, to customize the playlists, including the time of day.

It may not have the nostalgia of a plastic case filled with half-recorded songs, but a digital mixtape that predicts what you and your friends like? That’s something we’d hold a radio over our head for.